The innovation was executed at Mahim Causeway, targeting SEC A & B audience 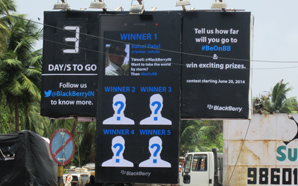 With an aim to inject curiosity into the audiences, BlackBerry rolled out a teaser campaign for their new smartphone Z3. The OOH campaign was an extension of their Twitter campaign where they urged people to comment on Twitter that what they would do to be on BB.  The brand utilised OOH medium to inform the large number of audiences about social networking content and as well as to celebrate it by putting winners' tweet and profiles on outdoor.  The entire teaser campaign was executed on a hydraulic campaign for the duration of 10 days in Mumbai.

The campaign was launched in two phases -- pre-launch and launch. The former session which started on June 18 communicated about the Twitter campaign by showcasing the contest details. After the span of 2 days, the creative was changed into a horizontal shape resembling a mobile structure and the best tweets were shown on the same. On June 25, on the launch day of handset, a BB Z3 mobile lookalike structure was made to give away the sense of the smartphone.

"This was a very intellective campaign. The idea was to give a surprise element to the audience and also to celebrate the activity by showcasing it on a big platform. This is just a small fraction of the overall OOH plan and the bigger campaign will start from July onwards. We wanted to treat OOH as an impactful medium. We don't believe in that tactical marketing is as effective on OOH. We wish to do more of this kind of activity,â€ said Amar Thomas, Country Marketing Manager, BlackBerry, India.

The smartphone brand planned to keep the teaser activity very exclusive which is why a truck was placed at Mahim Causeway considering it as an extremely visible, high-traffic areas and places targeting office goers audience. The campaign was targeted towards SEC A & B audience who look for intelligent cell phone with long battery life.

The brand has been able to get a positive response.  "Lot of people saw this outdoor campaign like partners, customers and retailers who drive from the belt.  Also various retailer came back to us talking about itâ€, concluded Thomas.