Times OOH ran a number of automobile campaigns on the most popular and premium Delhi-NCR toll plaza DND Flyway. They were done, keeping in mind the promotions that these auto giants focused at Auto Expo this year. Some new innovations were also introduced in these campaigns along-with many first-time endeavours.

As a precursor to the renowned auto exhibition Auto Expo 2016 that was recently held in the capital, automobile giants like Cardekho, Volkswagen, Maruti, Honda, Mini, Volvo, Castrol, Tata Motors, Royal Enfield, BMW, Bajaj and Yamaha resorted to heavy-duty OOH drive on the DND expressway connecting Delhi and Noida, while some outdoor media practice further extended to the Greater Noida Expressway. The campaigns started around the commencement of the show with different duration for different brands. The campaigns were executed by Times OOH, who have the sole advertising rights of the DND Expressway. 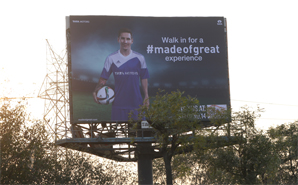 Talking on the campaigns and their messages, a source from Times OOH said, "Auto majors took to the DND to create an entry gateway to the Auto Expo 2016. It is one of the last few advertising hot spots before the Greater Noida Expressway and all auto companies flocked to create buzz for their halls at the Auto Expo 2016. Many creatives showcased the latest offering for their stables along with the hall number.â€

A number of innovations took place in this OOH drive. For example, 150 flags, 16 Standees and 14 mini totems were installed for Volkswagen, 30 flags and 250 side (railing) boards were dedicated for Maruti and helium balloons did the promotional activity for Honda. Online auto market brand Cardekho.com branded the entire toll plaza for the first time whereas only half the facia of the toll plaza was allowed to be branded from each side in the earlier scenario. "This time the client was able to dominate the entire toll plaza. Also, seeking and getting special permission for all the innovative displays like median flags, mini totems and side boards was a challenge. Mounting the mock up of the Mini on the billboard wasn't a cakewalk either as it had to be lifted and secured keeping all traffic moving and maintaining all safety precautions for workers,â€ Times OOH informed.