The FMCG Major has launched their out of home campaign with 41 backlit units displaying ITC's Food brands at the Koyambedu bus terminus in Chennai, one of the busiest and largest bus terminuses in Asia which has a footfall of 4 lacks. 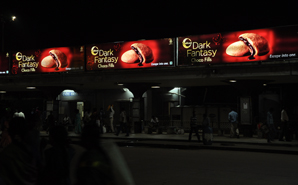 ITC Foods has taken over one of Asia's largest bus terminus Located in Chennai  to create a larger presence for its brands. ITC Foods brands such as Yippee Noodles, Aashirvaad Sambar , Dark Fantasy Choco Fills and Dream Cream Strawberry Vanilla biscuits dominate the display area at one of the most strategically located spots in the bus terminus.

The Chennai Mofussil Bus Terminus at Koyambedu is one of the busiest and largest bus terminuses in Asia where the average daily footfalls is 4 lacks and the total number of buses which ply is about 6000. Buses from CMBT ply within Chennai city and also to upcountry Tamil Nadu, Kerala, Andhra Pradesh and Karnataka.

The displays have been jointly executed by Vivaki and Oasis Outdoors, a leading Chennai based media concessionaire who has the sole advertising rights at CMBT, Koyambedu.

The brand's approach to Out of Home was to target a diverse set of audiences, who are likely to be part of the target group mix, across the daily set of commuters and passengers who come to CMBT and there was a natural fit with some of the leading brands of ITC Foods.

"The idea was to dominate one of the busiest and strategic entry and exit points in Chennai and the CMBT at Koyambedu Chennai was the perfect choice since it addresses a very large section of the TG at one single point,â€ says.Siddharth Subramanium, Principle Media Manager, ITC Foods Division who drove the campaign. .
Tags : ITC Foods CMBT Siddharth Subramanium
Advertisement