Executed by OAP(Outdoor Advertising Professionals) the'Fashion at Big Bazaar', campaign has been rolled out across different cities of West Bengal and Assam. 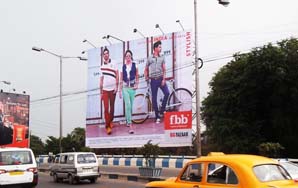 'Fbb' or'Fashion at Big Bazaar', recently rolled out a huge outdoor campaign in the major cities of East zone in order to showcase their new Autumn-Winter Durga Puja collection . The main highlight of the creative was to showcase FBB's new merchandise in ethnic, traditional, ethnic- fusion, formals, casuals, denims & tees and kids wear in an elegant manner and highlighting the price points which are pocket friendly.

Bengal and Assam respectively. Kaushik Mitra Chief Operating Officer- East, OAP, says in this regard, "For Kolkata we have used billboards & Metro train branding whereas in rest the region, only billboards have been deployed. Further, we are about to create a 3D cut-out on a billboard and'FBB' would be done up in LED.â€

Indeed, for the Big Bazaar's fashion campaign, outdoor played the role of prime media vehicle to drive the imagery giving a much safer and cost effective option to the brand in comparison to other media platforms available.
Tags : Big Bazaar OAP Kaushik Mitra
Advertisement