'Fast & Furious' is arguably the most popular thriller franchise involving fast cars and gravity defying stunts. The series, which has a huge fan following across the world, especially among the youth, has recently released its seventh edition in the series. Preceding the release, 16 of the DMRC stations, where TDI has exclusive advertising rights, have been utilised to announce the release of the film. The following stations across the Red Line and the Blue Line hosted sites where the movie, titled "Fast & Furious 7 - The Last Standâ€, projected its ensemble star cast: 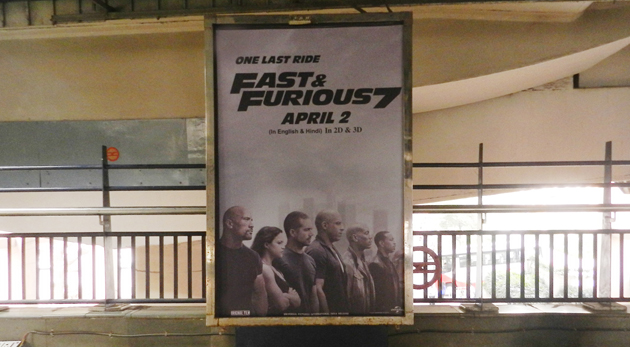 The Red Line of DMRC comprises some of the busiest Metro stations sprawled across areas swarming with industrial and educational complexes. Add to them, the two hubs of public transport in Delhi & NCR, the passenger volume at these metro stations are among the highest anywhere in the city. Products from the entertainment industry have traditionally thrived through promotional campaigns before large audiences. In the context of huge audiences, the above Metro stations of TDI have never disappointed.

The Blue Line is the preferred mode of public transport for the executives who travel to the offices in Noida & Greater Noida from Central, West & South West Delhi. The sites along the Blue Line are among the most favourable to attract young earning audiences. They form the most important target group for a'Fast & Furious' movie.

Even as the movie opens in India with a record Rs 12 crore collection, the OOH media displaying the movie's promotional posters continue to hold audiences in sway. The movie has been released both in English & Hindi and in 2D & 3D.