The brand promotes the message of democratization of the internet through fun filled activities at Movie Times theatre in the city. 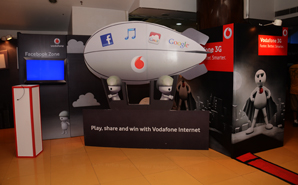 A unique initiative in the telecom industry,'Vodafone Internet World' was unveiled in Karnal by Tejinder Khurana, Business Head - Haryana, Vodafone India. A few lucky Vodafone Customers were also handed over free tickets for the special screening of the movie Madras CafÃ©. The Vodafone Internet World served as an ideal platform to engage and educate the people on the relevance of mobile internet and how it can transform their lives with vast opportunities.

In fact, as part of its strategy to democratize data, the brand has been hand-holding customers to use mobile internet and educating current and potential users about how internet can add significant value to them. The company is also building content partnerships, simplifying pricing, educating retailers and offering choice to customer basis their interests and consumption patterns.The activity gave people an opportunity to experience a whole gamut of internet options available on mobile like entertainment, games, social networking, search and much more. There were various experience zones likeâ€“ Facebook Zone, Gmail Zone, Music Zone & Google Zone for people to try Vodafone 2G & 3G services. Many people participated in the activities held across these zones and won exciting prizes.

Speaking on the occasion, Tejinder Khurana, said, "Mobile Internet has immense growth potential and we are looking to be an integral part of this opportunity by helping accelerate mobile internet adoption through penetration, consumption and value addition. With the Vodafone Internet World campaign, we are trying to bring our customers to have a firsthand experience to try out a host of 3G services on 3G enabled devices and also win exciting prizes. I would like to congratulate all the winners of Internet Offer Drive and wish them an exciting time at the wonderful world of Vodafone 3G.â€