The activity was live for 15 days, which saw the participation of around 152 women per society. 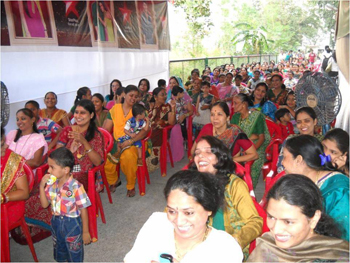 With an aim to promote the brand name and popular show Diya Aur Bati Hum, Star Plus and DDB MudraMax initiated door knock programs and invited people for society activations. The idea was to leverage the ideology of show'Nayi Soch' and at the same time make people sample the content. The ideation of the activity was done on the story's theme which encourages women to pursue their dreams while also being great
homemakers for women in the age group of 16-34yrs. Using the basic insight of "women love to dressâ€ ,"Jashn Nayi Soch Kaâ€ provided the invitees a platform where they could come dressed as Sandhya, Bhabho and Meenakshi who are the lead characters of the serial. The brand received tremendous outcomes with lot of women participating in the activity in full spirit dressed as these characters. Along with the celebration, the show was sampled amongst the audience to not only increase the interest of existing viewers but also build a new viewer base. There were women from other regional groups who viewed it for the first time at the activity zone and liked it, resulting in extending the audience base of the show to the non viewers. The best dressed Sandhya, Bhabho and Meenakshi were gratified.
Tags : Star Plus DDB MudraMax
Advertisement