The session'short term tenure ke side effects' focussed on how media owners and authority should jointly discuss the tenure issues to overcome them. 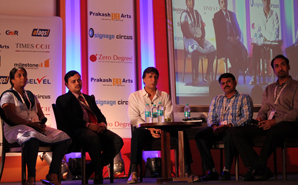 The session'short term tenure ke side effects' focussed on the pros and cons of the terms of tender which generally is for 1-5 years subject to renewal as declared by the respective Municipal Corporations. Noomi Mehta said, "The structure of OOH in terms of building up productive elements & beautifying the city through it can only be possible if the tender terms are long. The media owners should understand the clause of the contract before quoting the rates to the authority.â€ The major problems faced by the OOH industry revolves around issues like producing quality structure, rent, taxes and adjusting the booking days.

Further considering the present scenario where political favouritism are visible in the outdoor sites which are also affecting the business of the OOH industry should be managed in a well planned manner so that it does not effect the skyline of the city.  Ravideep Singh Chahar mentions, "It is an open platform and we must get feedback and suggestions from the media owners. There should be a collaborative effort on the part of the authority and media agencies and outdoor association to change the situation.â€

Uniformity in the governmental rules regarding advertising across the whole country can help the situation. The prosecution and the prohibitory aspects should be revised and strong implementation of the rules will make the situation better. The session concluded by suggesting that the OOH industry need the help of the authorities to make it a regularised and better one.