Eros International & Bhansali Productions has come up with a new OOH campaign to spread awareness on the release of their new movie'Ram-Leela'. The campaign was up in Mumbai and only on large format hoardings and kiosks. 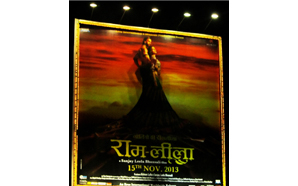 The Ram Leela campaign of Eros International & Bhansali Productions was an in-house creation and was executed for ten days by Bright Outdoor at major locations in Mumbai such as Juhu, Mahim, Mumbai Central, Lower Parel and others.

In keeping with the movie's essence, the hoarding at Chitrakut Ground in Andheri, has a bright colour scheme that gives an impression of a shadow like effect.  This in turn creates a larger-than-life feel to the campaign with the spotlight on lead actors Ranveer and Deepika.