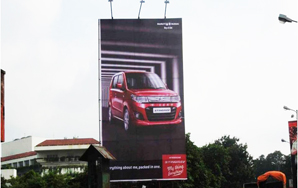 Maruti Suzuki has launched the'Wagon R Stingray' and to promote the same, the brand partnered with Laqshya Media Solutions who planned and executed a nationwide campaign. The purpose of the campaign was to create maximum visibility for the new model across the country and involved a lot of research and planning. The duration of the campaign was for one month and it made extensive use of as many as 250 media units across 20 cities, at main arterial routes, high traffic zones and key touch points.

The brief provided by the client was to generate maximum impact by using hoardings and spaces in relevant locations. Even though visibility was a crucial factor in the client brief, the idea was to ensure that the brand and the product stood out in a stylish and tasteful way without being too intrusive. Therefore the campaign designed by the agency included a mix of various media from billboards, gantries and unipoles to bridge panels and toll brandings.

Talking about the new campaign, Atul Shrivastava, COO, Laqshya Group, said, "We are happy with the efforts the team has put in to innovate and create a powerful OOH campaign for the new Stingray launch. The locations chosen have been excellent and ideal for such an important campaign. Since Maruti Suzuki has been a client with us for several years, we wanted to do something exceptional and different to make the launch a success.â€ 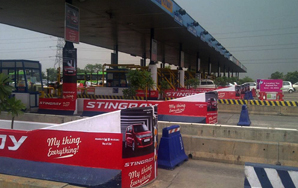 Speaking about the Stingray launch campaign, Vinay Pant, Media Head, Maruti Suzuki, said, "The brief for the campaign was to create good visibility through outdoor advertising for the Stingray Launch that would capture the attention of young, trendy people in the metros and even in the Tier II cities. We knew that creating such a large scale campaign would be quite a challenge but we are very pleased with the ideas and execution from Laqshya Media Solutions.â€

Avinash Singh, Media Manager, Maruti Suzuki, said further, "Our aim was to ensure maximum visibility for the new Wagon R Stingray and I am happy to say that the agency has delivered well on that front. I am especially pleased with some of the unique innovations like the branding at the Noida toll plaza. We look forward to many more exciting outdoor campaigns in time to come,â€ he said.
Tags : Maruti Suzuki Wagon R Stingray Laqshya Media Solutions Atul Shrivastava Vinay Pant Avinash Singh
Advertisement