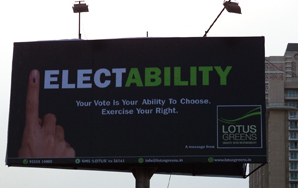 When the whole nation is gearing up for change through voting, how brands can stay far behind? NCR-based real estate developer, Lotus Greens embarked on a special outdoor campaign titled "Electability". The campaign's message and communication revolves around the act of responsibility in casting one's ballot. Lotus Greens "Electability" campaign is a timely message explaining the importance of voting and meant to sensitize voters to ensure a responsive and accountable government is in place.

The campaign dovetails the idea that greater citizens' participation in the exercise of democracy means a stronger representation and that this would help to bring about a good government as the outcome. Lotus Greens has put up billboards and hoarding with the message "Your vote is your ability to choose. Exercise your right," at various vantage points in the NCR.

"Our Electability campaign urges citizens to celebrate democracy, and casting one's vote responsibly is the best way to do it. In exhorting people to come out and vote responsibly, the campaign strives to waken a greater sense of political maturity and judgment among voters,â€ says P. Sahel, Vice Chairman, Lotus Greens.

The inspiration for the campaign comes from Lotus Greens' core business principles and philosophy, of which responsibility and accountability are two of the key planks. The company considers it an important act of responsibility towards the country and its citizenry by seeking to engage voters into exercising their franchise and make an informed voting choice. Lotus Greens hopes that its "Electability" message will induce people to come out and vote in greater numbers for the most deserving candidates.

At a time when the collective wish of the nation is to see a responsible and accountable government take office, the message of Lotus Greens Electability campaign is sure to ring loud and clear.