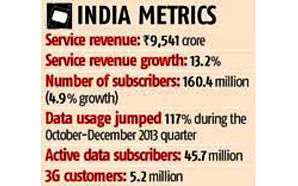 India has emerged as one of Vodafone Group's fastest growing markets. The company on Thursday said its global results were helped by strong growth in emerging markets such as India, even as its key European business continued to remain sluggish.

The company's mobile customers rose by 4.9 million during the quarter; its customer base stood at 160.4 million as of December 31, 2013, an 8.8 per cent rise compared to the year-ago period. Data usage jumped 117 per cent, owing to a 38 per cent rise in mobile internet users and a 65 per cent increase in usage/customer. As of December-end, Vodafone had 45.7 million active data customers in India, including 5.2 million 3G subscribers, the company said in its quarterly report.

The Vodafone group's service revenue declined 4.8 per cent year-on-year to Â£9.85 billion, due to a fall of 9.6 per cent in revenue from the European market. During the quarter, about 66 per cent of the Group's revenue was accounted for by its operations in Europe. "Our emerging market businesses are growing strongly, supported by consistent execution and accelerating demand for data,â€ said Vittorio Colao, group chief executive

"In Europe, conditions are still difficult, and we continue to mitigate these challenges through ongoing improvements to our operating model and cost efficiency.â€

The company also said it would follow through on its proposal to acquire the remaining minority stake in Vodafone India held by Piramal Enterprises and Analjit Singh. The company has recently received approval from the Indian Government for the same, and the Cabinet is likely to take it up on Thursday. Vodafone, however, did not carry any provision for litigation for its tax tussle with the Indian government during the October-December quarter.
Tags : Vodafone India Vittorio Colao Piramal Enterprises Analjit Singh
Advertisement