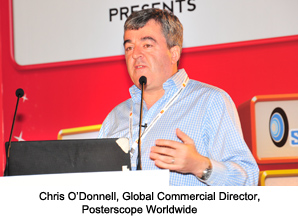 As the Indian OOH industry explores growth opportunities, global OOH trends will increasingly impact the industry's initiatives. Chris O'Donnell, Global Commercial Director, Posterscope Worldwide, touched upon this subject in his presentation on'Global OOH Trends: The Joy of Six - And what it means for India' on the opening day of OAC 2014 which was held in Goa during July 4-5.

In terms of the rise of new OOH destinations, O'Donnell referred to the expansion of transit media, and in particular airports. He cited the example of T3 at Delhi's Indira Gandhi International Airport where OOH advertising has taken a different hue. Destinations talk to people on the move, he said, adding that the opportunity is big at the point where people arrive after their air travel. These places are like glorified shopping malls, he observed.

Touching upon the second trend, O'Donnell said the challenges lies in fusing the experiential elements with traditional OOH. He referred to the initiatives of psLive in this regard. In time, psLive could become bigger than Posterscope, he said, adding that activation will increasingly command significant consumer interest.

Keeping in view these developments, he said that media planners will have to think differently when it comes to these destinations. Convergence in planning is the need of the hour, he asserted. This will get amplified as OOH business becomes technology-led.

He took the example of a real time activation of a beverage brand Cidre wherein the ads got activated when the local temperature reached a certain level. "YoY, Cidre sales volumes over the campaign period 22nd Jun - 20th July were up 65.6% and value share in the Cidre category also increased,â€ he said, quoting Nielsen Sales data 2013.

O'Donnell also talked about new trading models in the OOH business, such as, British Airways''Pay as you Fly' deal whereby the ad was bought on the digital billboard only when a flight was overhead.

The industry will be called upon to support real time marketing campaigns of different brands, he said.