EG Communications holds the ad rights on Line 2 that sees around 15.40 lakh commuters travel every day 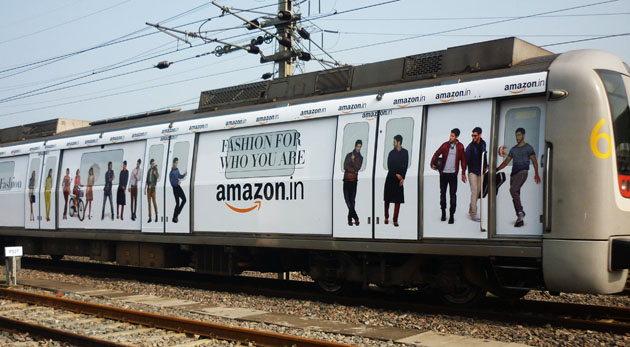 Amazon India has wrapped Delhi Metro rakes running on Line 2 to promote the fashion offerings available on its e-commerce portal. The campaign is aimed at promoting Amazon as an online fashion destination. The brand has strategically selected the media to tap the youth audience comprising office-goers, college students and those seen at other hangouts. EG Communications holds the ad rights on Line 2 that sees around 15.40 lakh commuters travel every day, whereas DDB MudraMax executed the campaign.

The Metro campaign, which commenced on January 1, 2015, involves both train wrap and inside panel branding. Metro Line 2 runs between Jahangir Puri and Huda City Centre.

According to Praveen Gupta, Director EG Communications, the agency behind the Metro campaign, Line 2 gets around 15.40 lakh commuters per day. "Amazon wants to target the youth as this campaign is about fashion. Hence, they chose Metro Line 2, which covers areas such as North Campus (Delhi University), Connaught Place, South Delhi and Gurgaon,â€ he said.