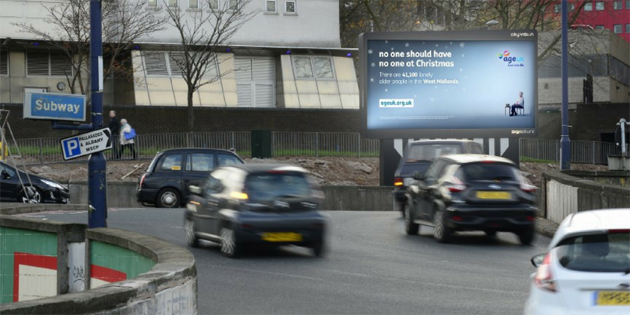 ‘The Drum’ recently featured an Age UK charity campaign titled 'No one should have no one at Christmas' that came in the form of geo-targeted digital posters that draw upon ‘loneliness heat maps’ to show pedestrians how pensioners in their local area are affected by loneliness during the festive season and other times of the year.

Launched earlier this year, the heat maps show the relative risk of loneliness across 32,844 neighbourhoods in England, using data from the 2011 Census and the posters used in the activation reference locally relevant figures to draw attention to the isolation felt by some pensioners; an example of this is the Holloway Head billboard in Birmingham which reads: 'There are 41,000 lonely older people in the West Midlands’ alongside the strapline ‘No one should have no one’ and a call to action to visit Age UK’s website.

Creative production house Grand Visual developed the campaign from repurposed poster artwork, while the drive was planned and booked by Talon and runs across Primesight, Signature and Clear Channel roadside D48 networks.