IndiaMART, an online marketplace, has wrapped the entire Delhi Metro train on the Yellow Line route, plying between Jahangirpuri and HUDA City Centre

The Metro wrap is part of a 360 degree campaign rolled out to position IndiaMART as the preferred choice of buyers for fulfilling all their key requirements, whether business or personal. The campaign has been executed by Rapport WW agency.

"Being one of the most popular modes of travel in the city, Metro promises to create a high brand recall among the people. The Yellow Line is one of the longest routes of Delhi Metro. Besides travelling through important business hubs like Chandni Chowk, Chawri Bazaar and Kashmere Gate, the route also covers Gurgaon, where the big corporate houses reside. We are confident that this initiative would help us reach out to a large pool of commuters and surround them with our brand, helping them understand us in a better way,â€ said Sumit Bedi, Vice President - Marketing, IndiaMART.

The wrap features various contextual messages, along with Irrfan Khan, who seeks to connect with people inside and outside the train by communicating about IndiaMART in an exciting manner. With the strategic route under its belt, IndiaMART primarily aims to gain the attention of people who are known to travel on this route regularly and communicate the brand thought'Kaam yahin banta hai'. A modern and a new medium that can turn heads, it promises IndiaMART to surely capture their interests.

According to Kavita Sharma, AVP, Initiative, "For the very first time Delhi Metro will be brand wrapped on the most longest and relevant routes of Delhi that covers key business hubs. We at Initiative are very excited by this activity and expect it to bring high visibility to IndiaMART and help in driving awarenessâ€.

The Metro has been selected strategically, as Delhi Metro, over the last decade, has successfully changed the way people travel around the city, with a large number of people flocking in at all times to move from one direction to the other. A modern and a new medium that can turn heads, it promises IndiaMART to capture the interests of a large number of people. 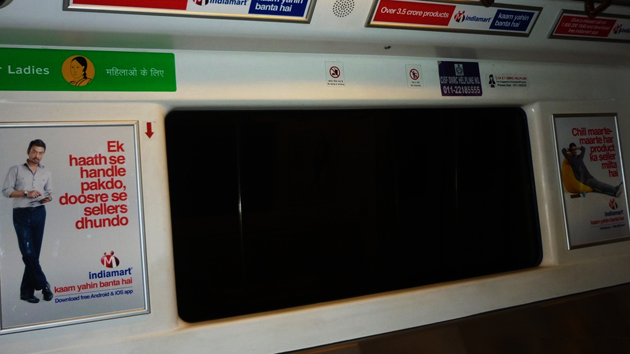 Charanjeet Singh Arora - AVP- Rapport WW, commented, "We are excited to partner IndiaMart in this journey. IndiaMart has utilised this wonderful large size clutter free mobile billboard to the best, the creative is very attractive and loud gives instant connect to the mainline campaign. Inside branding is very contextual and interesting and something which is very unique and never done before.â€

IndiaMART would be running a wrapped metro on another key route, i.e., Blue Line route as an extension of the campaign.