Home » Campaigns » A cut above the rest

A cut above the rest

Shapoorji Pallonji Real Estate, part of the global, diversified conglomerate Shapoorji Pallonji and Company, unveiled an impressive, innovative OOH display near the Bandra Kurla Complex (BKC) to promote its prestigious ‘BKC28’ multi-storied residential project located in Bandra East, one of the most sought after addresses in Mumbai. Taking inspiration from the iconic 5.6 km long Bandra-Worli Sea Link, the real estate major envisioned a replica of the sea bridge to be crafted at an OOH site near BKC that would capture the imagination of target audiences passing by that area. Sharing his perspectives on the communications objectives that defined the innovative OOH brand campaign, Parikshit Pawar, Senior VP, Shapoorji Pallonji Real Estate told Outdoor Asia that “the location and price point were the key communication drivers and our communication was straight forward”. The BKC28 apartments with a starting price of Rs 1.99 crore is game-changing, considering the project is located in one of the most premium places in the city.

When asked why the brand chose to have OOH in the media mix for the campaign, Parikshit explained that “when it comes to Real Estate as a category, OOH sums up as a key marketing medium. OOH helps us create the required impact, especially in the launch phase. The colours, fonts and communication were defined keeping OOH in mind and for the audience to grasp the essence within 10 seconds of eyesight reception.”

“OOH has really helped us create the required buzz in the market. In fact, as an extension of the main campaign, we targeted specific locations– Sion, Vikroli, Ghatkopar, Dadar, Chembur, among others –which were not the direct catchment area but helped us create that extra buzz,” he adds.

“The main objective was to make the communication to the point, hard hitting and impactful,” says Parikshit while adding that the TG comprises people with affinity to Bandra – either as their residential area or work location. The BKC28 project has already generated significant interest among people in the western suburbs. “We have even seen traction from international markets like GCC too,” he states.

The Bandra Worli sealink image is a part of our campaing running across mediums- states Parikshit.

Reflecting on the ideation of the innovation, Parikshit observes that “The Bandra Worli Sealink, which is an iconic structure, defines the location to a great extent. This is a landmark that has created its own importance with design, structure, etc. Since our primary communication had the Sealink imagery, we were inspired to get that into real life and use it as a branding medium. Also, there are no OOH options on the sealink, so we thought why can’t we create our own sealink to market on.” “We wanted to do an actual 3D innovation and not just a flex improvisation and thus the idea came into existence. The water tank that is part of the innovation was incidentally inspired by an Adidas’s Swimwear hoarding in Dubai,” he explains.

Arpit Singhal, Manager, Shapoorji Pallonji Real Estate commented that the idea was very well executed by the OOH agency. “We have been reviewing the operations at multiple stages, from planning to execution. We discussed the design in detail, did the alpha beta testing internally, also discussed fabrication execution with the vendors together. When this went live, there were multiple improvisation thoughts that kept popping up and we as a team ensured we could incorporate the maximum possible. It can be rightly pointed out that great ideas comes into existence with great partners with the right attitude,” he says. Speaking about the expected outcomes of the campaign, Arpit says, “Primarily, this is a branding exercise with no CTA. We wanted to own a prime catchment in Bandra which was possible with the OOH location itself. The innovation has been well acclaimed in the real estate fraternity and digital media. We have even seen pedestrians taking selfie alongside the innovation. Also, at our project site, we have had customer walk-ins and their mentions about the innovation. We have also seen increased walk-ins post the OOH going live.” Shahid Hakim, Founder, Wallop Advertising, while speaking about the campaign rollout, said the media brief received from Shapoorji Pallonji Real Estate was to bring out the essence of the project in the outdoor campaign in impactful manner. “The formula of any campaign = frequency x Impact, where impact is a function of creativity and execution. Therefore we wanted to get impact of at least 10 conventional hoardings in terms of ROI,” he states, while adding that the Bandra ROB live platform is uniquely created to cater for such media briefs for unconventional ideas.

Fabricating the innovation was no mean task. Shahid explains that to craft Mumbai’s most iconic landmark “we had to get architects, structural engineers, along with 3D modeling artist on board. The most challenging work was to have 50,000 litre of water to accumulate below the sealink replica.”

Several fabricators had suggested a timeline of over 50 years to craft the innovation. To achieve this in a shorter timeframe, Wallop Advertising had to adopt a hands-on approach and ensure that the fabricator completed the work in the shortest possible time.

Indeed, the vision of the team at Shapoorji Pallonji Real Estate, combined with the seamless handling of the campaign rollout by Wallop Advertising has helped to create one of the iconic OOH innovations seen in any of the markets around the country. 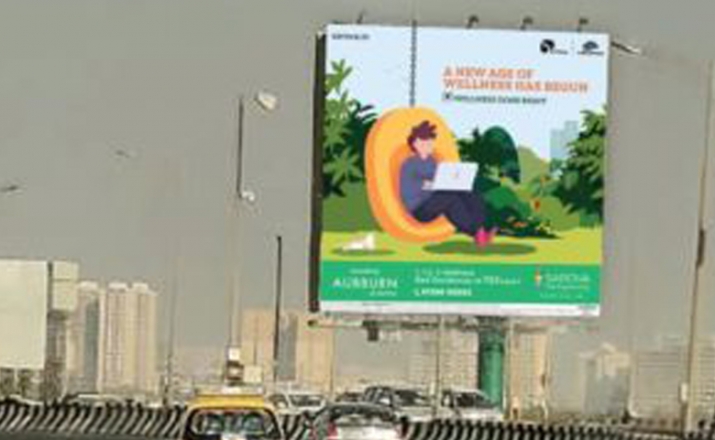 Shapoorji Pallonji’s new campaign is all about wellness