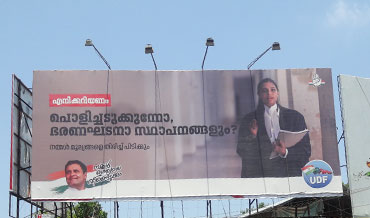 Just a week before the Lok Sabha election in Kerala, major political parties are opting for 100% pure cotton for large and small outdoor formats across major cities, towns and villages as an alternative material to polyvinyl chloride (PVC) as part of their political campaigning in the state.

Shifting from PVC hoardings, banners and flexes and moving to biodegradable materials was in keeping with the directive issued by the National Green Tribunal to the Election Commission, the Central Pollution Control Board and the Union Environment 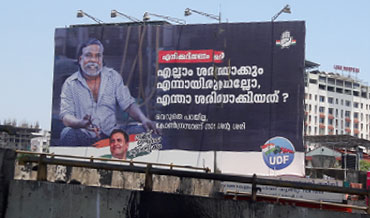 Almost 25% of OOH players in Cochin have handled political campaign e-deployed on formats such as mobile digital van displays, backlit, front-lit, billboards, hoardings and kiosk. The 100% textile-based fabric used by the Bhartiya Janata Party (BJP) to promote their outdoor campaign comprises about 10% of the OOH space, while the United Democratic Front (UDF) holds about 40% of the OOH space. The largest outdoor campaign is by the Communist Party of India (CPIM) of course, which constitutes about 50% in the state.

According to industry sources, the fabric material utilised by the political parties for election campaigning is prone to get damaged as the adhesive required for it to be fixed at the mounting pockets does not last for a longer duration and the display that it carries has a dull effect. The industry is also facing the challenge of procurement of this material due to the shortage of availability. The alternative means of using such fabric would be to stitch and fix it on and around the mounting pockets. Otherwise a suitable material should be introduced to replace and run the show, shares a source.