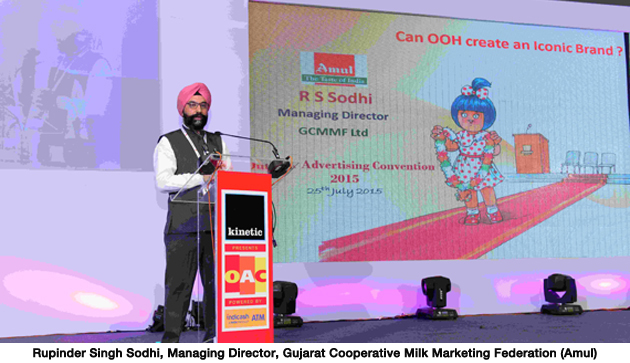 In his address, Sodhi brought home the contribution of each consumer in the growth of Brand Amul.

He informed that Amul is not a government body but is a cooperative run by 38 lakh families in Gujarat and 70% of them are landless.

Sodhi said that brand Amul has grown mainly via the outdoor. "Brands are built the same way as relationships are built. And Amul has achieved both,â€ he said. The outdoor medium has the ability to hold attention and generate enduring interest with its intrinsic appeal. A certain kind of cuteness, anticipation and excitement and the topicality of Amul advertising and its messages are what has endeared to the millions in this country. Amul's topical campaign has achieved iconic status. It was started in 1966.

Consistency in strategising and execution are the hallmarks of Amul's OOH approach. The topicality of the campaign is so important that the client and consumers often see the campaign at the same time. "And when we run into rough weather we face the music together,â€ he said.

"Our campaign essentially runs across only 80 hoardings at any given time all over India, and because it is strategically located it is seen as having a huge reach,â€ he said.

"We have also done Railway locomotive branding, bus shelter branding, graphics on distribution vans and our very own 2,000 Amul owned vehicles,â€ he added.

He suggested that syndicated data to measure industry numbers will help clients - so would a rating system for sites, so that a client can decide his budget and locations for campaigns. Clients will appreciate a transparent and objective system to help compare efficiencies with other medium.

He welcomed the fact that OOH Industry is now getting more organised and he professed that this trend will help clients in the long run.

Sodhi said that OOH will face stiff competition from the digital medium and so should look to gear up to sustain audience interest in the medium.