Organised by Mindwave Media, the activity was meant to help devotees at Kumbh who were anxious about getting lost. 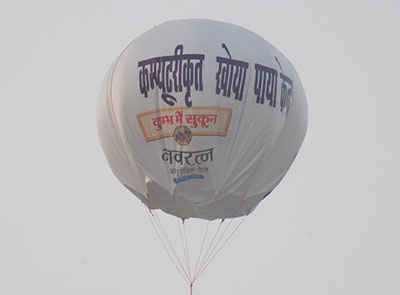 Navratna Oil, which launched the campaign ‘Kumbh Mein Sukun’ to help devotees visiting the Kumbh this year, has won 2 GOLD awards from RMAI Flame for the same. The brand was awarded the ‘Best Campaign Leveraging Technology Experience & Engagement and WOW for Experiential Marketing On-ground Promotion of the Year for Sales Volume’.

Navratna’s Lost and Found camps, one of the most successful Kumbh Mela campaigns, had been managed on a smaller scale in the past at the Prayagraj Kumbh Mela. However, a much bigger platform this year recorded a footfall of 15 crore.

Mindwave Media is the media and marketing arm of Vritti Solutions and was the execution partners for Emami Navratna Oil during the Kumbh Mela 2019.

The camps were set up at important and strategic locations in and around the Kumbh, like at the main Sangam point, prominent railway stations and bus terminus. However, just setting up a lost and found camp was not sufficient, given the vast area of 45 km that one had to cover. Navratna used technology to introduce ‘Navratna Suraksha Band’ a non-tearable waterproof wristband which had a unique ID for each devotee. Mobile volunteers were put into action to do on the spot registration. Technology was used to take care of the massive footfalls, while the database was updated on a real time basis and shared with the central server of police and other govt. agencies.

In the event of missing persons reports coming up at the Navratna Lost and Found camp, the details were flashed on a giant screen at the mela ground on a real time basis along with announcements. What’s more, RFID trackers were given to vulnerable sections, especially children and senior citizens. This was especially appreciated by the officials.