Creating excitement was taken to new levels with this Lipton campaign done by Kinetic in Bangalore, where the narrative depicted a scene starting with a dry scorching desert to freezing icicles, which leads to melting snowfall and finally refreshing cool greenery. 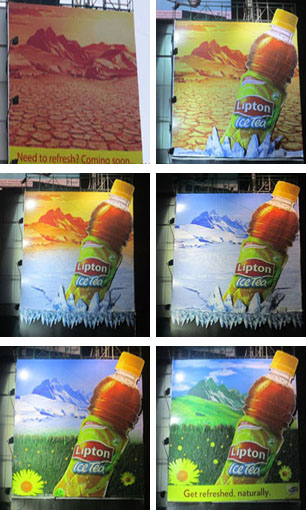 Creating a live experience on billboard was the core idea behind this Lipton campaign kicked off in Bangalore recently and the brief to agency Kinetic was simply to create awareness and excitement. With this in mind, the agency came up with an innovative approach to create a live experience with a teaser campaign narrating a whole story starting from a barren hot desert and ending in refreshing real green grass.

"Lipton Ice Tea was to launch in Bangalore, and the core objective was to create awareness and excitement among the consumers, by highlighting the unique combination of real tea & delicious fruit flavors. Once the client had shared the brief and the creative thought of a two-step transformation being depicted in their TVC, we had a very long brain storming session with our team, where the whole idea of creating a live experience on the billboard for the consumer was born. The team came up with the idea for doing the innovation on one billboard in Bangalore, where we would narrate a story by changing the displays and have the consumer experience the snowfall for the first time in Bangalore,â€ says Pushpendra Singh, National Head, Kinetic.

Says Pushpendra, "It was challenging to change the flex on a daily basis as we have installed a 35 ft 2 D Lipton bottle with icicles which had to be removed every time for changing the flexes. Also, the complete work had to be completed overnight as the new display had to be seen in the morning by the consumers and the whole activity was getting amplified on radio in the morning.â€

Well, that was not all. Live transformation from a desert to ice and snowfall obviously came with its own challenges.

"We faced challenges at various levels, while showing the transformation from a desert to ice, snowfall and then to greenery. To create the snowfall effect on the billboard in Bangalore, we had to install three snow machines. As for creating the greenery, we had to make sure that the grass stayed in a raised position on the billboard which was quite difficult,â€ Pushpendra adds.

But as he says, the efforts seem to have paid off, "The overall impact of the campaign was quite overwhelming and the response from the consumers received during the snowfall was excellent.â€ Well, this innovative campaign was seen across Bangalore as 40 billboards of approximately 40,000 sqft were taken up for it.