Though the outdoor structures in the city could withstand the high wind speed, some flexes were damaged in and around the city area 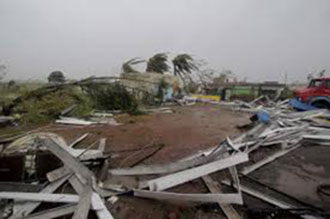 After Odisha, it was the turn of Kolkata’s OOH market to feel the impact of cyclone Fani. While there has been no record of damage to hoarding structure so far, there has been some flex damage reported due to heavy winds. Almost over 200 flexes were damaged, although most of them were removed as per the notice issued from the Kolkata Municipal Corporation.

Talking about the situation in West Bengal post Fani, Ratul Biswas, CEO, Arun Sign said, “It was not possible to remove all 2000-2500 flexes in and around the city overnight. Flexes, which were most likely to get damaged, were removed, but 2-3 hoardings which had innovations such as acrylic lettering and LED structures were damaged.”

In Odisha the cyclone impact was so bad that in cities like Cuttack several traffic signals, handled by OOH companies like Kolkata-based Enkon Out of Home, were severely damaged. “At present we are rebuilding everything on war footing,” shared Aninda Banerjee, MD, Enkon OOH.

As a precautionary measure the OOH firm had taken out all the large flexes from billboard structures ahead of the storm and had no record of structures falling down in Kolkata. It may be noted that the unipolar LED structures in the city had an in-built mechanism to calculate and display wind speed details and thus major damages could be avoided.