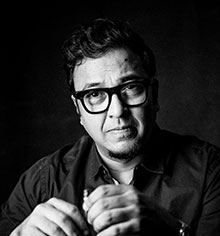 For some years now there has been a strong felt need to direct focused attention on the creative side of OOH advertising, as invariably OOH advertising creatives are adapted from creatives developed for other media, whereas there is immense scope for planning creatives for the varied OOH formats in the most compelling ways. Raj Kamble, Founder & Chief Creative Officer, Famous Innovations will be speaking on this subject in his address on ‘How creatives can transform OOH’ at the the 15th Outdoor Advertising Convention (OAC) that will be organised at the Renaissance Mumbai Convention Centre Hotel, Powai, Mumbai on July 26-27, 2019.

Some of the areas that will be touched upon are:

Raj Kamble is a graduate of the Sir JJ School of Applied Art. He started his career at Enterprise Nexus/Lowe, Mumbai, where he went on to win half a dozen Clio Awards and three D&AD Silver Pencils in his formative years.

He then moved to Lowe Howard Spink, London, where he worked on brands such as Stella Artois, Unilever, Nestle and Saab. After 2 years in London, he took up a new role as Creative Director at Lowe New York. His winning streak continued as he bagged One Show Gold and a Gold Lion at Cannes for his work for Stella Artois, Gillette and Light of Life Foundation. In 2010, he was hired by BBDO New York. His work titled ‘World’s Biggest Shave’ was talked about in the Financial Times, CNBC and the New York Times. After more than a decade in the business, Raj moved back to his hometown, as the Managing Partner for BBH India where he handled accounts like Vaseline, Diageo, World Gold Council and Google Chrome, etc.

He is now Founder and Chief Creative Officer at Famous Innovations. In 5 years since its inception, Famous has created some iconic innovations for several Indian and Global brands, is a three-time winner of South Asia Independent Agency of the Year by Campaign India and was listed among the World’s Leading Independent Agencies in 2016, 2017 and 2018.

Raj has cumulatively won more than 150 global awards including at Cannes Lions, One Show, D&AD, the Clio Award, the Andy Awards, ADFEST and Art Directors Club. He has been jury at Cannes, One Show, Adfest, etc. He has given lectures at institutes such as the Kellogg Institute of Management and Columbia University. He also runs Miami Ad School in India. Most recently, he has been elected to the Board of Governors at IIM-Kozhikode.