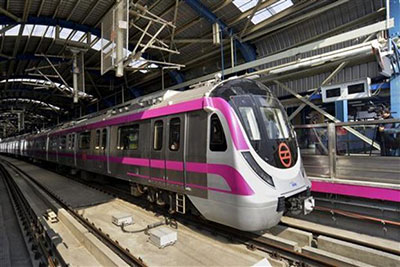 Delhi Metro Rail Corporation (DRMC) has invited bids to allot exclusive advertising rights on Line No. 7 i.e. Pink Line running between Shiv Vihar and Majlis Park. According to the tender document, the contract will allow for display of advertisements inside the Metro trains on Line No. 7 on static advertisement spaces/ panels, Passenger Information Display (PID) screens inside metro trains and on train exterior by wrapping. The maximum number of train sets/coaches for wraps permissible shall be 10% of the total train coaches running on the line subject to a maximum limit of 20% of total train sets under operational holding of any make and configuration for line-7.

The exclusive advertisement rights for the said advertisement spaces shall be awarded for 9 years from the date of handing over of the assets. The License Fee, maintenance charges for the digital screens and the Interest Free Security Deposit/ Performance Security shall be escalated & increased by 20% on completion of every 3 years of the license period i.e. after every 3 years from the commencement date of License period on compounding basis.