With the DDB Mudra Group moving towards digital driven transformation; Sommnath would be playing a pivotal role at DDB MudraMax by putting digital and tech at the heart of each campaign.

To strengthen the multi-specialty expertise of the agency and to help build brands in this age of data-digital driven convergence and complex consumer dynamics, DDB MudraMax has roped in Sommnath Sengupta as Head-Tech Innovations, OOH & Experiential. 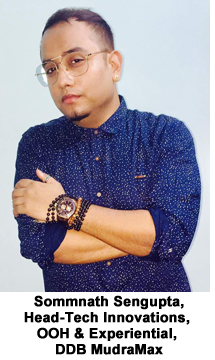 Sommnath Sengupta aka Somm, erstwhile the National Creative Director at Kinetic Worldwide (a WPP company) comes with an expertise in concept, digital content, digital activation, interactive content, design and tech innovations. In his career span of more than 15 years, he has specialised in creating interactive technological innovations; creations that have an impact on the brand and the consumer alike.

With the DDB Mudra Group moving towards digital driven transformation; Somm would be playing a pivotal role at DDB MudraMax by putting digital and tech at the heart of each campaign.

Somm’s earlier associations include long stints with reputed agencies like Kinetic Worldwide, Madison OOH, Ogilvy Action and Bates 141. At Kinetic, he was part of Kinetic’s Global Council and was instrumental in creating Kinetic’s static offerings into technology and ideas.

He was responsible for creating the new brand identity of Kinetic Worldwide.

Somm has worked with established brands like Audi, Cadbury, Ford, Google, Idea, Indian Super league, Motorola, Samsung, Vodafone to name a few. He has many ‘firsts’ in his kitty. India's first augmented reality experience for Star Plus show ‘Just Dance’ was his brainchild. In 2016, he customised Arduino Technology for Ford Mustang Launch at Delhi T2 terminal which garnered a lot of attention from the marketing, media fraternity and consumer alike. 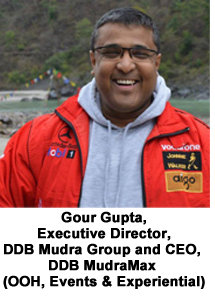 World's first rainwater harvesting billboard for Vodafone by Somm was a unique idea, driven with a distinct SIM based mobile technology that helped the drought effected regions across the country. One of his award winning ideas include ‘Mukhota’, the lifesaving mask with an exclusive GPS based product design, created for fisherman of coastal border regions. This innovation got a lot of appreciation and awards from Indian and international fraternity.

At DDB MudraMax, Somm will be based out of Mumbai and will be working closely with Sanjay Shukla, President, DDB MudraMax (OOH, Events & Experiential).

Quoting on his association with DDB MudraMax, Somm mentioned, “I am looking forward for an innovative association with DDB MudraMax. When we integrate technology with storytelling experience, we will be able to gather ‘data’ which is an integral part of any campaign.  We will be providing in-house, end to end technology solution from Concept – Design – Execution for our clients.”

On Somm’s appointment, Gour Gupta, Executive Director, DDB Mudra Group and CEO, DDB MudraMax (OOH, Events & Experiential) quoted, “Somm’s restless passion for technology’s integration in storytelling and interaction delighted me. He is the right fit to drive our tech integration and content. Since technology is our ally in storytelling experience, we will be offering our clients a bouquet of tech innovations and content creations with the integration of social media and data.”