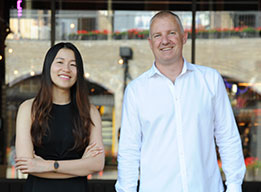 by 2022, valued at US$9 billion*, the Vivid City team operating out of London and Shanghai, is on a mission to unify the complex fragmented market Connecting brands with millions of Chinese consumers.

For clients it’s a winning trifecta, direct access, unique sites and best in class pricing, in one of the world’s fastest growing global markets. White Magnolia Plaza screen is a great example of one of the many screens in Vivid City’s portfolio. Located in central Shanghai on the Huangpu River the screen extends to over 23,000 square metres - that’s more than three times the size of a soccer pitch!

Three years ago, Vivid City founder Alistair Ballantyne, tried to book a DOOH campaign in China for one of his European clients. It was then he saw an opportunity:

“The number of companies involved in the media buying process resulted in high prices and long delays. This made me think that there is a clear opportunity to streamline the process. The mass fragmentation of media owners in China has given Vivid City the freedom to independently handpick the largest screens with the highest footfall and sociodemographic. Vivid City has packaged China’s preeminent mega screens to create a scalable business that provides our clients with a faster, more affordable way to reach China’s city-dwelling consumers,” Alistair said.

Vivid City sees a bright future with growth in urbanisation driving China’s OOH surge. Today, 59% of Chinese live in urban areas, that number will reach 70%, or one billion people, by 2030.*