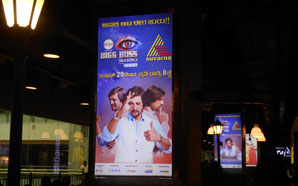 Reality TV shows are all about generating widespread audience participation. The outdoor is a powerful medium for such shows to draw in high level viewership and participation. True to this, Kannada TV channel Suvarna TV took the outdoor route in Bangalore and rest of Karnataka to generate widespread viewer interest in its big-ticket show'Bigg Boss Season 2', anchored by popular Kannada film star Sudeep. The channel vested the outdoor duties with leading Bangalore-based OOH firm Media 360 Degree Services India.

The focus of the campaign was to connect with predominantly Kannada-speaking viewers considering that the show itself is present in the Kannada language. Media 360 Degree deployed the campaign at prime locations in Bangalore and other cities in Karnataka using a wide media mix comprising hoardings, bus stand media, bus side and back panels, bqs, mall and multiplex media assets, railway station advertising medium, mobile display units, among others. It helped that the OOH firm owns a large share of outdoor media assets n prime locations in Bangalore and has a vast network of outdoor assets across the state.

More specifically, Media 360 Degree deployed the campaign on hoardings in Bangalore and Rest of Karnataka with innovations. The firm used retro reflective vinyl flex in 10 different locations in Bangalore - the first such initiative in Karnataka. This ensured that the campaign drew eyeballs even as the ambient lighting reduced or went off.

Among other initiatives, two mobile display units used for the campaign carried TV screens that ran the show's promos. At the railway stations, branding was done at the ticket counters so that it was in the line of sight of the travelers.

Commenting on the campaign execution, Arjun, Business Head, Media 360 Degree Services India, told Outdoor Asia, said the challenge was to roll out the campaign across different locations in a matter of four days. The challenge was made doubly difficult considering that the execution was done in the monsoon season. He commended his operations team for successfully executing the campaign, thereby ensuring its overall success. 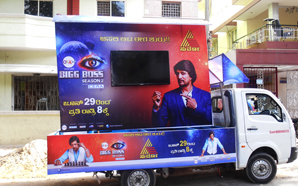 Media 360 Degree received widespread appreciation for its work. The firm informs that by virtue of its handling of the Big Boss campaign it has bagged the execution rights to two more campaigns in the month of August.
Tags : Bigg Boss Season 2 Suvarna TV Media 360 Degree
Advertisement