Edelweiss Tokio Life uses the power of activation to raise awareness about the risks involved in railway crossing in Mumbai. 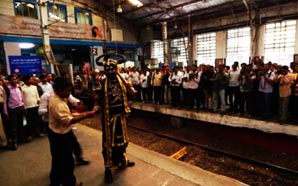 Crossing of railway tracks is a criminal offense and is what can turn out to be an open invitation to'Yamraj' - The God of Death! Yet hundreds of people in their mad rush, cross railway tracks on foot, board and alight trains in motion and in the process succumb to fatal accidents.

In order to raise awareness on this, Edelweiss Tokio Life in association with Western Railways initiated a railway commuter safety activity across key railway stations in Mumbai. The brand intended to educate and inform people about railway tracks  crossing do's and dont's.  And to make it live and more interesting, a'Yamraj' figure was used to rescue the audience and stop them from taking dangerous routes.

Considering the number of registered deaths caused due to commuter negligence, major local stations in Mumbai like Churchgate, Dadar, Jogeshwari, Borivali and Kandivali, were targeted during peak hours to maximize the reach of the campaign. Communication materials such as safety instruction pamphlets, conversation bubbles with messages, placards, and cutout standees were developed to enhance and accentuate the campaign. The idea was conceptualized by Edelweiss Tokio Life Insurance and supported by Western Railways; whereas the activation was handled by Brand Connect. 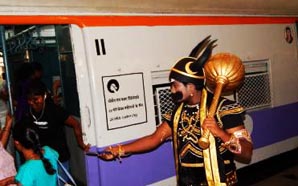 As a part of the activity, an actor masquerading as Yamraj entered the railway stations with a message asking people to adhere to railway safety regulations in order to ensure security of life. He cautioned people about the safety do's and don'ts. This CSR initiative was well thought of and came in at a time when recurrent fatal railway mishaps have been reported from all over Mumbai.

Ashish Morone, Vice President & Head - Marketing, Edelweiss Tokio Life Insurance, said, "The "Yamraj to the Rescue!â€ initiative is part of our brand's inherent trait of being a part of our consumer's daily life. Our brand positioning is based on our promise of understanding the "zarooratâ€ or need of a customer first and then offering a solution. In a city that sees so many people using the local trains for daily commute, safety is of prime concern. We are humbled by the buzz we have managed to create through this social campaign and more, by the opportunity to jointly work with the Western Railways in enhancing the general awareness about safety during rail commute.â€

Commenting on the initiative Vijay Cavale, Director, Brand Connect said, "The overwhelming response from Mumbai's commuters and the huge coverage that this simple activation received from local, national press and electronic media goes to demonstrate the power of a well executed and thought-out  activation campaign. We were glad to be a partner to this noble cause and if as a result of this initiative we can help save lives then it would mean "message well delivered and receivedâ€.
Tags : Edelweiss Tokio Life Western Railways Ashish Morone Vijay Cavale
Advertisement