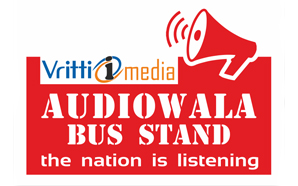 The firm has been holding sole rights on this medium in Maharashtra, Punjab, Karnataka, Rajasthan and Goa with a total reach of 350 million people across 300+ locations. This mass medium is being used by 200+ corporate brands to reach small towns and rural India. Vritti iMedia is the sole concessionaire with the state transport corporations and operates the "Audiowala Bus Stand" on build operate model. “We at Vritti i-Media are always inspired to perform, innovate and deliver dynamic and ground-breaking solutions to our clients,” says the company.

Audiowala Bus Stand is India's largest audio network at a transit place with a captive audience from small towns and rural mass medium and reaches media dark areas. The medium enables advertisers to create local brand awareness or give a reminder in local language or dialect. The advertiser’s message reaches the masses as the advertisement is coupled with bus departure announcements which is the most important information for people travelling.