Executed by Aiswaria Advertising, the branding activity was done on a passenger boat in the Alleppey district of Kerala. 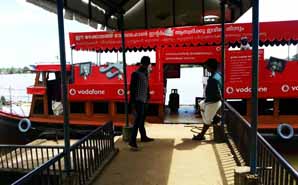 Ever active on the Out of Home front, brand Vodafone has this time leveraged yet another unique OOH media vehicle to reach out to its target audience across remote corners of Kerala.  The brand recently initiated a branding exercise in the state on a passenger boat in Alleppey, at the Punnamada back waters where the annual Nehru Trophy boat race is held every year. The boat regularly covers an area of around 50 km around the backwater locations of the Kuttanadu area and the Monsoon campaign was meant to create awareness regarding the recharge of Vodafone products in the interior areas of the Alleppey district. The campaign began on July 2013, kicked off with a high profile ceremony, and though planned for a period of one month, it was extended to two more months given the good response. 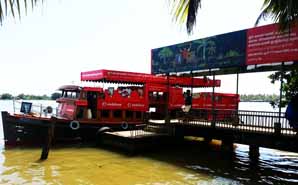 These passenger boats are one of the main vehicles of commuting in these parts of the state and the brand managed to promote their network in remote areas of the Alleppey district such as Kuttanadu and other rural locations through this branding activity executed by Aiswaria Advertising Industries. The campaign was well covered the English and Malayalam media of the state.