The telecom major along with Bates created an eye catching campaign in Uttar Pradesh to promote their 2G and 3G Internet trial packs available at Rs 25. 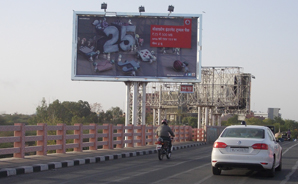 Vodafone India, one of India's leading telecommunications service providers, in a very innovative way, is making mobile internet more interesting and less intimidating for its customers. Vodafone has introduced their'One Time Trial Packs' for 2G and 3G at unbelievable price points, giving its customers a taste of mobile internet and its advantages. The unique aspect of Vodafone's latest data packs, available at Rs 25 is that it comes with a never before 500MB data allowance.
This offer was promoted during the IPL, and in order to make the campaign even more impactful, an innovation was created on the Gaurav tower Flyover, which is one of the most prominent locations and hence caters to a huge audience as well. The campaign is an extension of the TV commercial which shows Zoozoos at work and carrying various benefits which one may get with the internet trial pack for Rs.25 and putting them in the edifice of 25. During the day time, the number 25 appears three dimensional  and rest of the  applications  are kept as two dimensional, making it look visually appealing and emphatic. At night, the number 25, is lit with led lights while the other applications keep blinking one by one.
This is a month long campaign done by the Bates, will be present in the top 10 towns of Uttar Pradesh East, primarily Lucknow, Kanpur, Gorakhpur, Varanasi, Gorakhpur, Azamgarh, Raibarielly, Shajhanpur, Jhansi and Allahabad and also in Jaipur and Rajasthan. Sites that were chosen to cater to the key arterial routes in order to get the maximum reach.
With the introduction of this innovation, the campaign has been able to get the attention of its target audience and has also made its way through the clutter.
Tags : Vodafone Bates Zoozoos
Advertisement