The radio taxi service in Mumbai plans for 10-12 campaigns per month along with a license to operate 4000 cabs for FY13 which is tendered by MMRTA. 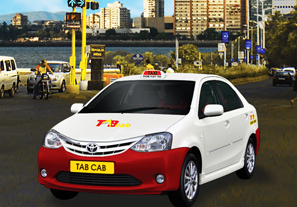 TABcab has executed 32 brand campaigns on taxi ads in one year with an average campaign using 150 cabs. The transit media which accounts for 15 % of outdoor media was able to perform this feat due to buzz created by the TABcab team which include PR, retailers, outdoor media and sales team. This year TABcab has been granted license to operate 4000 cabs tendered by MMRTA while getting ready to launch 950 cabs within next one month. Currently there are 1850 cabs in Mumbai with 1200 cabs running the 32 brand. TABcab operates in Mumbai and has plans to start their venture in Bangalore and Delhi soon next year. Prasenjeet Bagchi, CMO, TABcab, plans to provide luxury cab services in India at affordable prices with one of its kind experience.
Taxi Ads are gaining momentum and have been used by some major brands across cities in India and across the world. In India the campaigns are executed for large multinational as well as local brands such as Standard Chartered Bank, TATA I-Shakti, Docomo, Ultratech Seal & Dry, MTDC (Maharashtra Tourism), Westside, MTV, Comedy Central, Regus, Lovable, Live-In, ICICI, Union Bank, Central Bank, Shakti Bhog, 99 Acres, Swarg Jewelers, Cera, J Hampstead, Godrej, Bharat Matrimony, Parampara, Richfeel etc. TABcab can also be used for activation, sampling and other engagement activities since travel time in Mumbai ranges between 45 minutes to 2 hours per trip which is very high captive time for communicating.
Tags : TABcab Prasenjeet Bagchi transit media
Advertisement