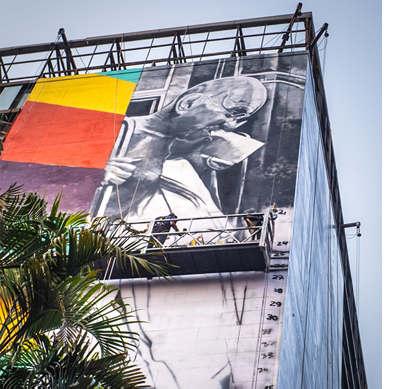 St+art India Foundation and Asian Paints, along with the gracious support of Western Railway and the Consulate General of Brazil in Mumbai, have come together to transform Churchgate station, one of Mumbai’s busiest stations, into a work of art.

Legendary Brazilian street artist Eduardo Kobra, known for his remarkable photorealistic portraits rich in colour and geometric kaleidoscopic shapes, pays tribute to historical leaders who stood in the name of peace-creating unforgettable landmarks in cities. The Mahatma Gandhi mural, which Kobra is in the process of creating at Churchgate station, is in-line with his aim of creating public art masterpieces which are democratic in nature and symbols of peace - messages which are particularly relevant to our times. The project at Churchgate is an opportunity to offer commuters a cultural experience through murals in the most accessible way possible.

The train network has always been an integral part of the country’s history, especially during the Independence movement where they were a valuable resource. Hence this mural weaves together one of the most iconic characters of India’s freedom movement, on the facade of one of the Mumbai’s oldest train stations.

Amit Syngle, President-Sales, Marketing, Technology & Home Improvement, Asian Paints Ltd, commented, “We are yet again thankful to the St+art Festival for getting renowned artists to refurbish the city’s famous landmarks. We are also grateful to the Western Railway for helping us take this initiative a step further. The commuters will get a glimpse of marvellous creations of quirky, colourful murals and graffiti. We are sure the artwork will make one stand and pay attention to the painting on the wall.”

"It is a great honour to paint in a country so rich in culture and population diversity and also another great opportunity to highlight the theme of peace, through a mural of Mahatma Gandhi. I am here to speak of peace and show my art, but also to know and learn. Being in India is one of the great moments in my life as an artist and human being," said street artist, Eduardo Kobra.

The artwork which is on the outside facade of the landmark Churchgate station, one of Mumbai’s beloved stations, has been made possible because of the support of Western Railway.

“We are happy to associate with St+art and Asian Paints and eagerly wait to see the creation by Eduardo Kobra on walls of Churchgate,” said Aarti Singh Pratihar, Senior Divisional Commercial Manager, Mumbai Division, Western Railway.

The mural of Mahatma Gandhi in Churchgate station aims to use the power of public art to create a dialogue and join people under a positive message of peace.

“Churchgate station is a landmark for the city of Mumbai and through this mural it is set to become an iconic site for the rest of the world. We have been trying to get Kobra to India for a couple of years now, and the fact that thousands of people who use the station everyday will get to experience his wonderful artwork first hand, is a dream fulfilled," said Akshat Nauriyal, Co-founder of St+art India Foundation.

“Images speak louder than words. Kobra’s approach is always powerful, creating symbols which relate to every human in a direct and empathetic manner. His unique technique, the scale and the locations of his pieces, add to the iconic strength of his art catching the eye and connecting souls. His work in Mumbai will represent a milestone in the Urban Art history,” said Giulia Ambrogi, Co-Founder and Curator of St+art India Foundation.

Some of Eduardo Kobra’s most celebrated pieces include the portraits of Oscar Niemeyer in Sao Paolo, Albert Einstein and Mother Teresa in Los Angeles, ‘Kiss’ in Times Square, New York. Along with his team, Kobra created the Guinness world record for the largest spray-painted mural “Etnias”, for the Rio 2016 Olympics.

Over the course of the next 3 months, the St+art Mumbai festival will bring 30 international and Indian artists to Mumbai to create murals, experiential exhibitions, performances, workshops, curated tours, screenings, talks and many more interventions that will bring various creative communities together. The aim is to create newer ways of re-discovering the city through art and urban design interventions.

St+art Mumbai 2017 will see the creation of a public art district in Mahim (E), a reintroduction of the Sassoon Dock (Colaba) through an experiential walk-through exhibition, a photo blow up with the international Inside Out Project by iconic French artist JR as well as a massive installation at the pristine Jindal Mansion by one of India's top designers - Manish Arora.

Kobra has been brought to India with the support of the Consulate General of Brazil in Mumbai.

Rosimar da Silva Suzano, Consul General of Brazil in Mumbai said, “I believe Kobra’s work will be cherished by all Mumbaikars and the many thousands of daily commuters that alight at Churchgate station. I sincerely hope his artwork will remain as a symbol of the friendship between the peoples of Brazil and India and, at the same time, a monument to peace."

The mural is an adaption of a photograph of ‘Mahatma Gandhi at the Railway station, early 1940s’ by Kulwant Roy, which is owned by Aditya Arya Archive and India Photo Archive.