The brand engages audience in an on-ground activity to create buzz about their Rice to Riches- Season 2 campaign. 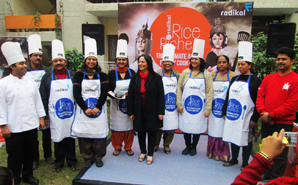 Cashing on the success of Radikal Rice to Riches campaign last year, Radikal Foods Limited has once again come up with their unique on-ground activity. The brand has organised a competition called Radikal Rice to Riches-Season 2 with a slogan of "Be active and eat healthyâ€. An ultimate Active Family Cook-Off is spread across 9 cities pan India. The activity has been kicked off in Delhi, Mumbai and Kolkata, Ahmedabad, Chandigarh, Pune, Hyderabad, Bangalore and Chennai the on ground activity has been started from 5th January 2014. The activity has scaled up from the previous year and has reached to a consumer database of over 1 million people.

Rice to Riches-Season 2 is an Interesting, nationwide consumer connect initiative, on the lines of Radikal's recent campaign,'Radikal Rice makes you Active to win every battle in life'. Rice to Riches -Season 2 invites consumers to participate and showcase their culinary skills to battle out with others contestants in the league, and give them a chance to showcase their cooking talent on one of India's leading entertainment channel.

During the activity, the complete range of Radikal nutritive and healthy premium basmati Rice was showcased. Wet sampling of Biryani, made out of Radikal Rice was also organized for the consumers. To engage more consumers, Radikal Foods arranged a few activities based on activeness and fitness along with interactive quiz competition, which made the whole event highly entertaining .

Quite overwhelmed by the huge response from the activity, Siddharth Chaudhary, M.D, Radikal Foods Ltd said, "We are delighted to get such an overwhelming response by the consumers. Rice to riches-Season 2 will strengthen our relationship with our end consumers, as this is one of its kinds of initiatives by any rice brands where over thousands of consumers will be participating to fulfil their dream to become the celebrity chef.â€

This year's Radikal Rice to Riches - Season 2 is a big initiative to connect with its consumers by Radikal Foods. The finalists of the cook-off from each city will be invited at a designated location for the final mega event and further the finalists will then compete against each other to decide the national champion. The winner will be awarded the title of "India's Most Healthy & Active Familyâ€ and will also get a chance to win a mega prize in Radikal Rice to Riches-Season 2 - The Ultimate Active Family Cook off Contest.
Tags : Radikal Foods Rice to Riches- Season 2 Siddharth Chaudhary
Advertisement