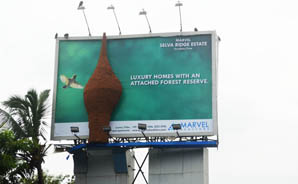 Marvel Realtor, a real estate company based in Pune, has launched a ten-day campaign at two sites in Mumbai -- Haji Ali and Mahim -- to promote the brand as a serious luxury real estate player among Mumbaikars. The campaign began on August 26, 2013 and will be up till September 5, 2013.

Marvel Realtor, which has been in the real estate business for twelve years now, has come up with a new project called Selva Ridge Estate with the USP being a super luxurious property situated in the middle of a forest reserve. The innovation on the campaign was executed to highlight this unique feature. The campaign thus has hoardings with a weaver's nest installed on them with green being the base colour that brings alive the core proposition of the property - a luxurious home right in the midst of a forest reserve. The creative agency TBWA India has worked on the innovation of the campaign and the Outdoor agency Target Advertising has successfully executed the whole campaign to give it a real feel by overcoming challenges like monsoon which could have been a real dampener quite literally . The hoarding located at heavy traffic areas is expected to catch eyeballs and create impact among the target audience.