Executed by ABC Advertising, the creative of this campaign has been the most unique aspect which has attracted numerous eyeballs. 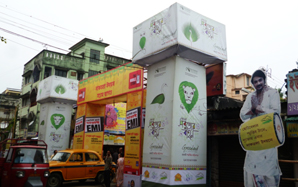 India Green Reality Pvt. Ltd., a prominent Real Estate name which has been actively promoting green living by creating'Luxurious Bungalows Amidst Verdant Environs' has now adapted the same "Green Livingâ€ proposition to create a Greenland Puja campaign. The brand has launched an extensive festive campaign including banners and gates at various popular Puja pandals, like Naktala Udayan Sangha, Shib Mandir, Hindustan Park, Regent Park and others throughout Kolkata and the suburbs.

Executed by ABC Advertising, the creative of this campaign managed to attract numerous eyeballs. The brand used various'bahons' (the animals on which Maa Durga and her family come riding on to the earth) in the creative. The lion, peacock, duck, owl and rat form a'Green Brigade' which endorses green living. The brand has said they have truly personified India Green and its flagship product Greenland-The Eco Village. The idea is all about welcoming the divine Goddess to the'Greenland' on Sobujer Bahon and this is the idea which helped in brand image building this year too.


In the crowded OOH space during this Durga Puja, the campaign stood out with its novel creative and the OOH format ensured clear visibility amidst the competition.
Tags : India Green Reality Pvt. Ltd. ABC Advertising
Advertisement