One of the biggest cultural and religious event in Maharashtra was used as the platform by GoodKnight and Iodex for customer activation in a contextual manner, which was successfully executed by Vritti Solutions.

Pandharpur Wari or pilgrimage to Pandharpur is amongst the most awaited, social and religious occasions in Maharashtra. The famous 250 km walk during Pandhapur Wari that crosses the length and breadth of Maharashtra is a huge social event. Targetting the massive crowd, GlaxoSmithKline Consumer Healthcare's Iodex Massage Van came as blessing in disguise for the pilgrims, while GoodKnight Fast Card had a specialized First Aid van to treat commonly occurred ailments during the pilgrimage. Both these innovative rural activations were executed by Vritti Solutions. 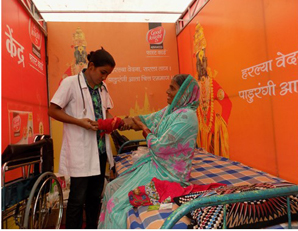 GlaxoSmithKline Consumer Healthcare, one of the leading healthcare companies, introduced a highly creative idea of "Iodex Massage Vanâ€ last year. The concept was greatly appreciated by everyone because of its utility and direct mapping with the event. The overwhelming success of the campaign last year was so encouraging that the team wanted to acquire further heights of success this year. Iodex being an established brand for quick relief from all kinds of pains, the catch line "Badan Dard ka Expert, Sirf Iodexâ€ is the punch line which means "Iodex is the best remedy for every kind of body acheâ€ has been communicated well during the walk.

The campaign offered 12 branded vans that accompany the Pandharpur Wari from the first day to the day procession gets over. The well-equipped and well-branded vans offer instant relief from pain and discomfort to the pilgrims, while  the branded tents served pilgrims during the breaks or night to rejuvenate and make them ready for the next day. 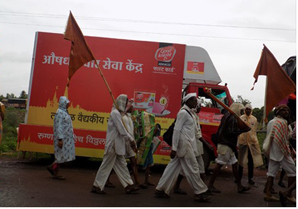 GoodKnight Fast Card also uses the opportunity to create a mass brand awareness program by offering an immediate resolution of the problems faced by pilgrims during the Pandharpur Wari.  The objective of the campaign was to resolve the issues with an incredible speed so that it justifies the tagline of the product, i.e. "Fattack Se Furrâ€. A specialized First Aid van was designed for maximum visibility during the event. The van went along with the Wari proceedings, and sufficient noise was created to make it as popular as possible by Vritti Solutions. Since Fast Card is established in the market as one of the fastest mosquito repellents, pilgrims could relate with it very well because the First aid treatment offered to them provided immediate relief. The van also educated people about the dangers of mosquito bites and the easy methods of getting rid of mosquito outbreak.
Tags : GoodKnight Fast Card Iodex Vritti Solutions Iodex Pandhapur Wari
Advertisement