Executed by ABC Advertising, the campaign has been rolled out in all the strategic locations of Kolkata which sold out 50% of the bungalows within 3 months of the promotion being launched. 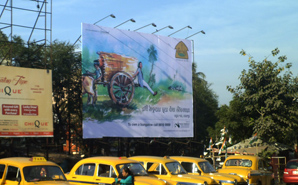 Executed by ABC Advertising, the Sobuj Potro outdoor campaign rode on the strategy of venue marketing. The objective of the promotion was to capture the imagination of the target audience by projecting Shantiniketan as a gift of nature, a haven of peace and tranquillity, and a centre of art and culture. Thus the visuals for the outdoor campaign were rendered in water colours combined with photography which helped in increasing brand recall making it different from other real estate project communication visuals . The campaign blended illustrations of heritage, art and craft, and the lifestyle of Shantiniketan with visuals of modern day protagonists, 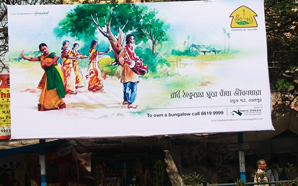 thus capturing the myriad shades of Bengal. For example, a city woman rode a bullock cart and strummed a guitar while a'baul' played the'ektara'. Urbane ladies participated in the'Basanta Utsav' in some visuals and on other billboards they danced with a'dhunuchi' in the'Durga Puja Mandap'. The well known Bengali singer Surojit sat by the Kopai river with the guitar creating music. The visuals were a treat for the eyes and stood out in the clutter and in this phase not a single Sobuj Potro bungalow has been shown contrary to the convention.

The outdoor advertising created quite a buzz and helped the new project in getting registered very fast in the mindscape of prospective buyers, particularly the ones with a cultural bent of mind.
Tags : Sobuj Potro India Green Reality Kolkata
Advertisement