The 'Leave No Trace' initiative ensured spreading the message of sustainable and pollution free environment. 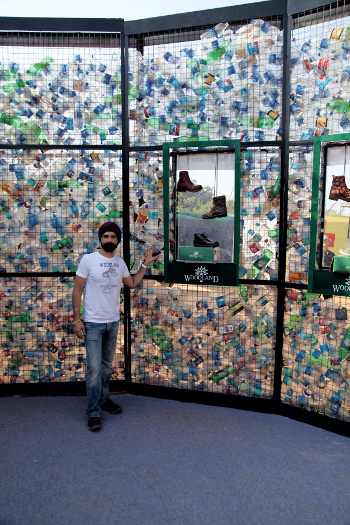 Woodland, the global outdoor and adventure wear brand, ensured a clean Goa during Sunburn 2012 with the'Leave No Trace' (LNT) campaign through what it calls the ProPlanet Pod initiative. The brand ran a campaign which successfully motivated the participants of Sunburn to keep the venue clean.
Woodland added on to the success of the fest Sunburn 2012 which is an amalgamation of music, entertainment, food and shopping held recently in Candolim, Goa during December 27th, 28th &29th.The'Leave No Trace' campaign was well received and supported by the participants and organizers of SunBurn Goa 2012 with deployment of over 80 ProPlaneteers, 80 bins and 8 marshals supervising the activation at the venue on all three days of the festival.
The initiative ensured spreading the message of sustainable and pollution free environment. Woodland's ProPlaneteers ensured that all the waste items were collected and transported for recycling processes, leaving no trace behind. Participants were awed by the first ever, massive structure'ProPlanet Pod' that stood up elegantly bearing props that spoke about the brand's ProPlanet initiative. Giant installations made of waste materials were also used to spread the message around. The LNT campaign achieved its goal by inculcating of social responsibility among the youth.
Protecting environment is something that Woodland has been advocating since its inception and the'Leave No Trace' Campaign through the ProPlanet Pod stands as a testimony to this.

ProPlanet Pod, a community committed to making the planet a better place to live in, was promoted by well-known creative agency Apro Green Tech. Woodland used environment-friendly materials like organic cotton for its products, and use recycled paper for the packaging of its products under its ProPlanet initiative.
Celebrating the response from the SunBurn Goa 2012, Harkirat Singh, Managing Director, Woodland Shoes, said, "ProPlanet - our CSR initiative was born with the brand since we are an adventure brand and conservation of the environment for adventure. SunBurn Goa was the series of LNT initiative, Noida activation being the first association. We were amazed and touched to see people from all walks of life engaging themselves with Leave No Trace campaign by Woodland during the 6th edition of Sunburn Goa. Woodland feels proud to have inspired the youth, spreading the message of Eco Friendly lifestyle through this initiative.â€
Advertisement