The idea was to create an interesting interplay between'reality' and'fantasy', by extending the product itself. 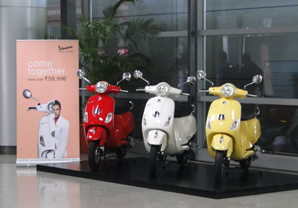 In the world of two wheelers, Vespa signifies fashion and known for its timeless style. The iconic brand has been embraced and loved by many generations across the world. What happens when an'emblem of lifestyle' lands up as an'icon of fashion' and at the most aesthetic, credible and vibrant place? It is sure to create considerable buzz. Passengers at Rajiv Gandhi International Airport were in for a pleasant surprise when they were greeted by the beautiful and aspirational Vespa two-wheelers and got a chance to pander their fantasies of coming closer and experience the product in its real physical form!

Laqshya's Hyderabad Airport team, created an interesting OOH concept titled'Reality Aids Fantasy' for the iconic Vespa's campaign. The idea was to create an interesting interplay between'reality' and'fantasy', by extending the product itself. Further the messaging is enhanced by the usage of appropriate media. Each scooter at the Rajiv Gandhi International Airport departure has a media unit as its backdrop, displaying the brand advertisement of Vespa.

The classic Vespa in its new age retro avatar pervades the Airport with its vivacious presence and heavenly looks. The positioning and visibility cater to the aspirational needs of the fashion, style and brand conscious passengers, who wish to be exclusive, distinctive and in fact a breed apart just like the product in itself. The campaign is deployed at the most noticeable and high traffic areas like, the Security Hold Area and Domestic Arrival Area. Commenting on the Campaign, Krishna MV, Assoc. VP marketing at Piaggio (Vespa) says, "We are extremely pleased with the concept proposed and executed by Laqshya Hyderabad Airport team. The product display has a look and feel very apt with the brand. The attention catching interactive and engaging strategy by the Laqshya team has helped Vespa in getting an elite passenger-audience come close to the brand.â€

Vespa's presence at RGIA makes it the first ever product display of a two wheeler brand at Airport. Sharing his views on the campaign Shashi Sinha, Sr VP, Laqshya Media  says, "The responsibility to deliver the brand its opulent stature was challenging and our team did not just propose them the media units but a concept that enmeshed advertising with product promotion. A concept was created with the real product (product display) which has an advertising media (static media) as a backdrop to aid the audience to go on a fantasy ride aided by a real Vespa in front of them that they could see, touch and feel. We are extremely excited that Vespa liked our concept and gave us an opportunity to execute it. It is a matter of pride to have Vespa in its modern avatar at our airport as Vespa is present at the deep memory of each Indian in their 30's. It is a fresh edition of their childhood!â€
Tags : Vespa Piaggio Laqshya
Advertisement