Printed and executed by outdoor agency Arun Sign Service Pvt. Ltd., more than 100 man-hours and 80 people were engaged in creating and installing the mammoth poster, which consisted of individual prints that were fitted together on site. 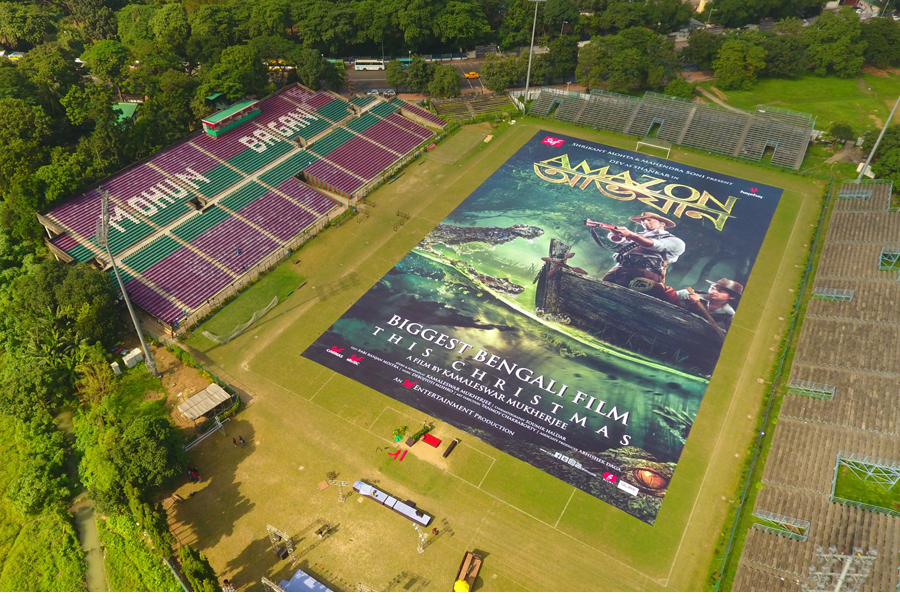 Outdoor advertising in Kolkata has never had it this big — literally — surprising everyone with its innovative use of installing an enormous poster on the football ground for the first time. With the launch of a huge poster of the Tollywood blockbuster Amazon Obhijaan by SVF, eastern India’s largest movie production house, at the football ground in Kolkata, Tollywood actor Dev (Dipak Adhikary) has ensured the crowd gets its money’s worth over his upcoming film whose colossal poster has been an outdoor innovation benchmark for other films and ad campaigns to follow suit or replicate.

Director Kamaleswar Mukherjee’s Amazon Obhijaan, whose English version christened Amazon Adventure will be released on December 22 in multiple languages, will be the most expensive Bengali film ever produced, surpassing its prequel, Chander Pahar, the highest box office grosser till date.

Amazon Obhijaan’s poster has surpassed all the outdoor billboards, hoardings, banners et al with its humongous size stretching from 97-metre-long (320 feet) to 58-metre-wide (190 feet) that has been placed horizontally on the ground. The poster, if placed vertically, would be taller than the famed Big Ben (96 meters), the Statue of Liberty (93 meters) or closer home the Qutub Minar (73 meters). Occupying an area of 60,800 sq. ft for branding Amazon Obhijaan, SVF broke the record for the film poster of Baahubali.

Printed and executed by outdoor agency Arun Sign Service Pvt. Ltd., more than 100 man-hours and 80 people were engaged in creating and installing the mammoth poster, which consisted of individual prints that were fitted together on site.

“Our vision is to take Bengali cinema to newer heights. The launch of the biggest Bengali film poster has set new standards in marketing innovation in Tollywood. Amazon Obhijaan, the most expensive Bengali film, which will release in multiple languages to entertain every Indian youngster — deserves no less,” said, Mahendra Soni, Co-Founder & Director, SVF.