Festivals are one the best channels for a brand to strike a chord with the TG using the Outdoor media. The latest to have followed this approach is Reliance Communications which has effectively leveraged the Navratri Garba festival in MP by making an illuminating presence on the OOH medium across the state.

In today's cluttered market scenario, it is simply not enough for a brand to be close to the TG. It needs to have a presence that makes it embedded onto the audience's perception and memory. Leading telecom brand Reliance Communications decided that the best way to do this in the state of Madhya Pradesh was to have an illuminating presence during the Navratri Garba festival. The ambient campaign saw some interesting branding done inside the stadiums such as neon signage, LED welcome boards and live Interactive floors with animations. The primary objective of the campaign was to create effective brand recall and extend it to an interactive live experience of the brand Reliance 3G. The campaign was organised at four venues and two top cities of MP for nine days. 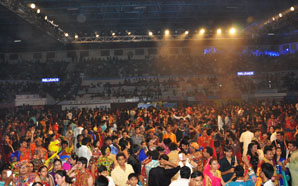 Speaking on the significance of banking on the Navratri festival to reiterate branding, Aveek Biswas, Head - Brand & Communication, Madhya Pradesh & Chhattisgarh, Reliance Communications Ltd, says, "Festival branding specially in venues are strategically very different from regular branding as it is not a direct business/purchase decision making spots hence it is very important to create an association with live and innovative communications along with branding and creative messages. This is the only strategy where you can overcome being just another brand. Navratri Garba has blended in to a mass based cultural festival for 9 days in MP. Navratris are basically the start of festive season leading to all purchase decision, and consumer spends starts with this festival in MP.â€ 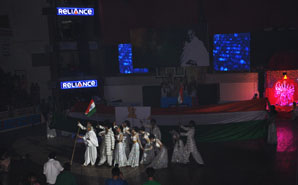 The campaign helped the brand in tapping the huge number of footfalls at a single venue, a rarity in outdoors.  The fact is that during these nine days, the big venues register a minimum footfall of 30 thousand per day which extends to 50 thousand + on weekends of Navratri Garba days. Also, the footfall profile consists of SEC A+ and A & B with the age groups of the visitors being 15+ to 55 years. This TG, which visits the venues primarily for participating in the Garba fest and lapping up the entertainment package of celebrity based events, music, food and stalls, also spends a long time at these venues. So the scope to create brand recall is very high.

Thus the brand, instead of merely putting up another brand banner and frames to fill the vacant places, went one step ahead and created a live and vibrant presence. To enhance the visibility of the campaign, the media planning parameters were drafted considering the footfalls and movement of the crowd inside and outside the venue. The brand executed the media and branding visibility elements accordingly.

The campaign involved quite a few challenges being executed at multi locations. Also, since the whole campaign involved LEDs and special lighting, it needed a lot of technology and infrastructure support such as power supplies, position of camera angles - motion sensors and power adaptors etc. There were also execution challenges at the spot/venue during installations. Besides, portraying the brand communication on the floor required some strategic planning in terms of location. Vikas Bissa from the national Brand team at DAKC was roped in to handle and manage this aspect. Thus team work and physical presence at the time of execution helped the brand in seamless execution. 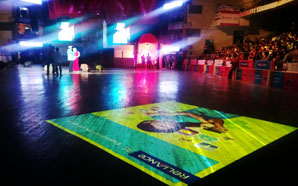 The response obviously caught on as people stopped at the locations to be a part of this live interactive floor responding to their movements. There were kids totally taken up with playing on the floor, while there were adults wanting to cross the interactive floor just to get a feel of it. The celebrities too were quite excited to see the live innovations right in front of them.

While summing up the whole campaign, Aveek says, "I would like to acknowledge my team members Naveen Kokash, Munish Srivastav, Support Staff & creative designer Hari OM Singh & Chandan Parihar for rendering the brilliant executions and managing on ground installations and execution in partnership with the agency Vision Force & Madhya Advertising who also played an important role in getting this idea executed on ground and on time. I also convey my special thanks to our Circle Head Mr. Yashwant Singh for his involvement and guidance to the entire campaign.â€