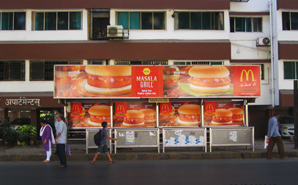 McDonald's has added a new variant to its Indian menu card - The Masala Grill burger, billed as'Pakka Indian.' The launch was actively supported by a 360 degree holistic marketing campaign with a mix of TVCs, print, outdoor and in-store promotions. Milestone Brandcom extended the OOH campaign across 300+ touch points in four cities. The campaign continued for a period of three weeks, where large media formats like billboards, gantries, wall wraps and unipoles were used. Extended presence was built using bus shelters across all major junctions and arterial routes.

Rameet Arora, Senior Director, Marketing & Menu Management at McDonalds India - HRPL said, "The campaign acknowledges and celebrates the colourful life that Indians typically lead. Right from our inherent habit of looking for value in every bargain to our competitive spirit, it captures the elements that make us truly Indian. The communication has been crafted to create an instant connect between the product and the consumers. It attempts to actively engage customers to reach out to what they believe is Pakka Indian.â€ 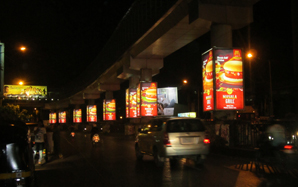 To distinguish the campaign on OOH & interact with consumers more effectively, Milestone Brandcom took the communication message from OOH onto activations. To draw more attention to these spicy delights, Ronald McDonald's across all the McDonald's outlets in India was seen wearing a Pagdi (turban).  Along with Ronald, the employees & delivery boys for McDonald's wore this Pagdi. The Pagdi was customized across various regions to appeal to the religious diversity. Stalls were set up across all major McDonald's outlets & promoters took interviews of consumers asking them if they were aware of these new spicy delights & what were their views on Ronald's new avatar.

Taking this activity on-ground to connect with the'Pakka Indian' in all of us; Mc Donald's decided to add some spice to an otherwise monotonous day at Kalyan Mall. A circular platform with 3 mortar & pestle's was set up in the central atrium. A group of ladies dressed in traditional Indian attire were seen grinding spices on this podium & inviting people to pound spices & interact along with them. To make it more exciting, arrangements for on the spot clicking & printing of pictures complemented the activity making it an'Pakka Indian' experience to cherish!
Commenting on the campaign, Hanoz Patel, Founder Member & Managing Partner, Milestone Brandcom said, "We are honoured to be associated with brand McDonald's. We have executed great work together in the past. The objective for the Pakka Indian campaign was to maximize impact of the new launch. In order to create buzz & interactions amongst the customers, it was essential for us to take an unconventional approach. We carried the message of'masaledar' across engaging innovations at relevant audience-centric touch pointsâ€
Tags : McDonald's Rameet Arora Milestone Brandcom Hanoz Patel
Advertisement