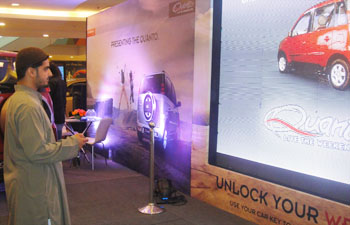 The Mahindra Quanto, a compact SUV from M&M Auto launched a mall digital activation with an aim to popularize its brand proposition i.e. versatile enough to create enjoyable'weekend' moments every single day. In association with Hungama Digital Services, brand thematic Mahindra Quanto colours and storylines to emphasise the Weekend Life, organized activation'Unlock your Weekend' across malls in Mumbai, Hyderabad and Bangalore.
A Quanto was shown on a screen and to'unlock' it on screen; visitors were asked if they had a car key in their pocket.  Anyone with a car key could participate. It didn't matter which brand of car they drove. Visitors had to press the unlock button on their car keys while pointing the key at the screen. Hidden behind the screen was a radio frequency receiver, where the agency had programmed the box to read multiple radio frequencies, and translate them into a command on screen. This command would then play out various videos.  Six different videos were showcased on screen; each video depicted a'weekend' activity like a trip to the beach, a family wedding, a trek etc. Lucky visitors would activate a surprise video; a gift box would tumble out of the Quanto, which meant the visitor had won himself/herself a weekend getaway. The activity was targeted at the young, adventurous, energetic urban consumer.
Tags : Mahindra Quanto M&M Hungama Digital Services
Advertisement