With over 1400 media touch points and 9,00,000 sq ft of exhaustive vinyl, it was ensured that the entire country was plastered with DSP BlackRock. 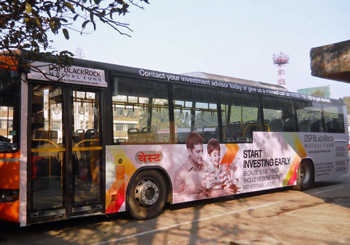 DSP BlackRock, a leading mutual fund company, developed a high-decibel OOH campaign in association with Milestone Brandcom with the objective of encouraging more investors to plan their finances as soon as possible.

DSP BlackRock capitalized on this theme and decided to target their brand communication to the audiences in an effective manner by playing on the'emotional factor'. The creative focused on events in our day to day life which should be done'sooner rather than later'. The campaign communication was'Start Investing Early- Because some things should be done sooner, rather than later.'

Commenting on the campaign Aditi Kothari, EVP and Co-Head of Marketing, DSP BlackRock Investment Managers Pvt Ltd said, "Our communication objective was to encourage more investors to plan their finances & start investing as soon as possible. The brief given to the agency was to build brand salience using the Out-of-home medium as a canvas. The campaign, executed by team Milestone, left no arterial route or media without our brand presence. The work done on OOH is a critical success factor in the number of leads and enquiries for DSP BlackRock & to an extent even the investments generated during the campaign period.â€ 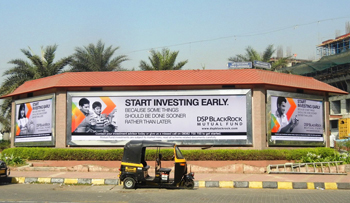 Milestone Brandcom executed this all pervasive campaign for DSP BlackRock across 35 cities. Mumbai, Delhi, Bangalore, Kolkata, Hyderabad, Chennai, Pune, Ahmedabad were among the major metros. An assortment of large format and unconventional formats were employed for the campaign. The campaign began in February'13 & continued for 15 days.

"Mutual funds have become a widely popular and effective way for investors to participate in financial markets in an easy, low-cost fashion. The media mandate to Milestone Brandcom was to create awareness on DSP BlackRock's range of mutual fund investments & bring DSP BlackRock on TOM recall while investing. The core communication objective was to build salience for the brand and maximize impact through high visibility and scale. To ensure the right audiences were reached, we executed a high intensity, all pervasive OOH plan across the key target markets. We ensured brand presence along every key arterial route & important transit junction across the 35 cities,â€ said Imtiyaz Vilatra, Founder Member & Managing Partner, Milestone Brandcom.

Milestone Brandcom has delivered an excellent campaign right from planning to execution. As a result of this campaign, the brand has received great accolades from competition & other agencies alike.