with an aim to create a personal connect with kids, the channel organized"Toon Cricketâ€, their on-ground property, in a larger-than-life manner.

Cartoon Network has been organizing "Toon Cricketâ€, their on-ground property over the past decade. Last year, the brand planned to come up with an even bigger and better live event that could engage kids and parents with the brand and its cartoon characters. DDB MudraMax team co-created an idea to have an award show for kids, of kids and by kids titled -'CN SUPER TOONS'.

The event was designed in three stages. During the pre-event stage, the agency worked towards creating visibility through multiple platforms including digital and on-ground activations.

The canter activity was executed in three cities including Delhi, Bangalore and Hyderabad. A fabricated float was stationed at pre-identified places in each city, close to schools and residential societies. Kids were invited to have fun via games organized on this float. A plasma screen on the canter was used to showcase the innovative award categories which would encourage kids to cast their vote. They were given tablet phones to vote for their favorite Toon characters. This activity spanned across 3 days and 6 different locations in each city.  In Mumbai, there was an extensive school contact program executed in order to invite kids for the mega event at the MMRDA Grounds in the Bandra Kurla Complex. 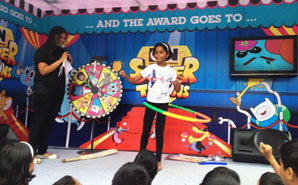 During the award, a grand entrance arch and red carpet was designed to welcomed kids and parents to the award show. Along the red carpet, life-size character cutouts were placed, which acted as a photo-ops for the kids. To amplify the Cartoon Network experience, there was an interactive gaming stall as well.

The main event saw various performances, gags and cartoon mega stars. The show opened with a brilliant act called'visual poi' in which the pyro-techniques made the act a visual delight. The award categories underlined the traits of the Toons that make them popular with the children. Therefore, categories like Badmaash Toon, Biggest Dhamaka, Bhukkad Award, Ha Ha He He Award, Dumb Dumb Award, etc. were included in the list of awards. Cartoon Network characters like Ben Tennyson, Oggy and the Cockroaches, Johnny Bravo, Kris & Kanishk from Roll No 21, Tom & Jerry, The Powerpuff Girls, Scooby Doo etc. performed to the latest Bollywood numbers and enthralled the audience with their humorous gags. Select kids from the audience were invited to give away the trophies to the winning characters in every category.

While organizing this, the biggest challenge was to conceptualize something out-of-the-box, unique and entertaining for thousands of children and their families. 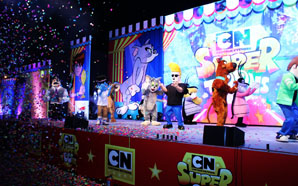 Speaking about the initiative, Krishna Desai, Sr. Director & Network Head - Kids, South Asia, Turner International India Pvt. Ltd. said, "At Turner, we have always pushed the boundaries when it comes to innovative entertainment for kids and families. The Cartoon Network Super Toons event gave children an interactive opportunity to not only vote for their favorite shows and characters but also live the experience of Cartoon Network heritage at its biggest and best event yet. DDB MudraMax has delivered a successful event with a dedicated and committed team.â€

Commenting on the event, Mandeep Malhotra, President, DDB MudraMax said, "This was an amazing event. I totally enjoyed being with kids and kids enjoyed being with their favorite cartoon characters. The joy, the fun and the enthusiasm was very infectious.â€

Overall, it was a captivating hour of sheer entertainment and cartoon brilliance. The audience left the venue with broad smiles on their faces and with a promise of coming back next year. The event was attended by over 9,000 kids and their parents.
Tags : Cartoon Network DDB MudraMax Krishna Desai Mandeep Malhotra
Advertisement