With an investment of Rs 4 crore, the foot over bridge has been executed under the PPP model with Kolkata Municipal Corporation 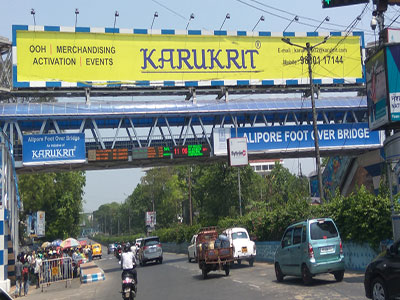 Karukrit Advertising, which won the sole rights for foot bridge construction and maintenance in front of Alipore zoo in Kolkata, has inaugurated the media recently. It is a 33 metres long standing 6.5 metres FOB constructed above the road in front of Alipore zoo in Kolkata. This mandate has been awarded by the Kolkata Municipal Corporation for a period of 30 years. The gantry has been equipped with manual stairs, escalators, 24x7 security system, CCTV cameras, backlit, front-lit, LED lighting and LED screen displaying information on weather forecast, time and pollution levels.

On the occasion, Debasish Saha, Executive Director, Karukrit Advertising comments, “Currently, this is the first ever operation foot over bridge in Kolkata for advertisement. Inaugurated by the honourable Chief Minister, Mamata Banerjee. The construction of this foot over bridge took 11 months to construct with modern amenities and has witnessed the highest footfall so far.”