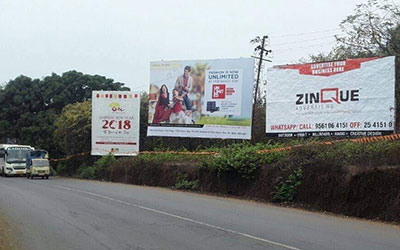 The Goa Government recently announced their decision to regulate the regional OOH industry by introducing a unified OOH policy across the state. The announcement was made a week ago by Vijai Sardesi, the Deputy Chief Minister of Goa, wherein he expressed that large size hoardings were becoming an “eyesore” to cities’ skyline.

The Town and Country Planning committee was initially responsible to monitor signage in the heritage sites and the need arose because of haphazard signage placement at heritage sites in the state. “Panjim has old buildings and owners have allowed placement of signage on the buildings, which is disrupting the beauty of the city. So, the Committee decided to have uniformity in the signage,” said Angelo Nunes, Proprietor of Adcity Advertising and Treasurer of All Goa Hoarding Owners Association. “However, they went on to say that uniformity should be followed on hoardings across Goa as well, which is not reasonable,” he added.

Currently, the 2008 Policy is in operation in the city of Panjim, according to which media owners pay to the Panchayat, but the government is not getting any share of the revenues from these media.

Sharing his views on the new policy announcement, Pradeep Palekar, MD of Primeslot Event Pvt. Ltd, said, “There is no need for this policy in Goa, as it will eventually lead to an increase in the license fee and become a burden, given the existing condition of the regional business.”

It may be noted that one of the main concerns for the Goa outdoor industry currently is the trend of short duration campaigns in the state. “Brands book the media for a week to 10 days, up to a maximum of 20 days. After 7 days, I have to go find another brand,” shared Pradeep. Angelo agreed that since the practice was adversely impacting their revenues, short-term campaigns in the city should be discouraged.

Another major problem that the industry faces is the entry of players who set up illegal sites across the state. As per the 2008 law, no additional hoardings should be put up near cluster sites. However, illegal hoardings have come up in the state, which is ruining the city skylines. As Angelo pointed out, these new hoarding don’t belong to the members of the All Goa Hoarding Owners Association, but to the newcomers.

The Association is hoping to meet with Vijai Sardesai to discuss the uniform policy on hoardings and the issue of illegal sites in the state.