Sony Max spreads'Darr' in the outdoor 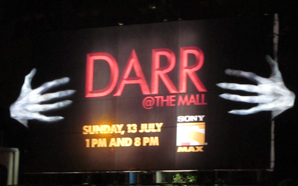 Sony Max has rolled out an OOH campaign mall activation for its premiering movie'Darr @ the Mall' in the typical movie style through eye-catching creative on billboard and inside malls. The objective was to create a buzz for the TV release.

A large size billboard placed at Juhu junction, Mumbai was creatively utilised for showcasing two huge ghost hands coming out of the back of the site. To enhance its visibility, a black and white tone was given to the hands.

Inside the mall, the channel used the washroom to create an eerie effect. Mirrors were painted with red blood-like imprints and hand impressions. Red paint droplets on the floor created the effect of splashes of blood. The lift door was also branded from the outside with the movie name and date and time of show. This activity was executed in Fun Republic Mall, Andheri and the lift branding was done at Imax Wadala.
Tags : Sony Max Imax Wadala Fun Republic Mall Darr @ the Mall
Advertisement