The'KFC So veg, so good', campaign was kicked off in Pune with mouth-watering images of their veggie meal on hoardings meant to grab the attention of the TG. 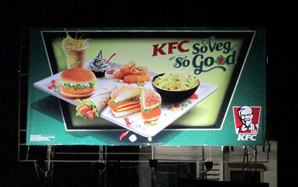 To maintain their strong hold in the market and beat competition, KFC has introduced a new vegetarian spread for KFC lovers. The announcement has been made only through billboards with the campaign being up for a month having begun on September 10, 2013.

Creative agency Encyclomedia  has conveyed the message effectively using more of visuals rather than words with the billboard containing only five words including the brand name. The pictorial display on the billboard is so well crafted that it gives a 3D impression though it's on flat print.

Mukesh Manik, M.I.C, Encyclomedia Networks Pvt. Ltd says speaking on the importance of design, "In an Outdoor friendly campaign, no matter how beneficial the'content' is, if not told interestingly and in a captivating way, the campaign might get lost in an already cluttered environment. At Encyclomedia we make sure that our designs blend with the medium and

assist the brand attain both'Brand Recall' and at the same time generate'An Impulse to buy '. The creative freedom given to us by KFC India helped us immensely in coming up with the concepts that would generate the desired impact. We are delighted to once again get the opportunity from Yum! Restaurants, India, for their'KFC So Veg. So Good' campaign.â€